May 22, 2021; Tampa, Florida, USA; Tampa Bay Lightning left wing Ondrej Palat (18) is congratulated by defenseman Erik Cernak (81) as he scores a goal against the Florida Panthers during the first period in game four of the first round of the 2021 Stanley Cup Playoffs at Amalie Arena. Mandatory Credit: Kim Klement-USA TODAY Sports

Alex Killorn collected two goals and two assists and Nikita Kucherov added a four-point performance to lead the host Tampa Bay Lightning to a 6-2 victory over the Florida Panthers on Saturday afternoon.

The defending Stanley Cup champions hold a 3-1 lead in the best-of-seven series. Tampa Bay will look to close out the first-round series on Monday in Sunrise, Fla.

Anthony Cirelli, Yanni Gourde and Ondrej Palat also scored and Andrei Vasilevskiy sparkled in net with a 39-save performance for the Lightning.

Jonathan Huberdeau and Carter Verhaeghe tallied for the Panthers. Sergei Bobrovsky was victimized for five goals on 14 shots before being replaced by Chris Driedger, who made 11 saves.

The win may have come at a high price for Tampa Bay.

Kucherov, who missed all of the regular season following hip surgery exited the game midway through the third period after being slashed on the knee by Anthony Duclair.

Tampa Bay defenseman Mikhail Sergachev also left the game after crashing into the boards following a hit from Patric Hornqvist with 3:36 remaining.

Looking to claim the first home-ice victory of the series, the Lightning opened the scoring on Cirelli’s breakaway goal just three minutes into the game.

Gourde doubled the lead off a deflection at the 7:24 mark. 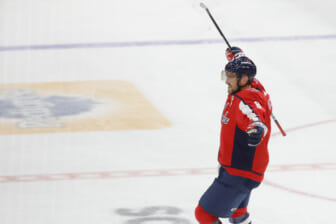 Huberdeau, who also notched an assist, put the visitors on the board when he buried a long rebound chance for a power-play goal 85 seconds later. Palat, however, regained Tampa Bay’s two-goal edge after his deflection beat Bobrovsky with 3:15 left in the period.

Killorn scored a pair of second-period goals 94 seconds apart to make it a 5-1 clash before the midway point. His first goal came on the power-play at 5:41 before he was left alone in the slot during a rush. That spelled the end of the afternoon for Bobrovsky.

Verhaeghe’s power-play tally with 75 seconds left in the second period trimmed the Panthers’ deficit, however Kucherov buried a one-timer for a man-advantage goal at 4:47 of the third.