Jesus Aguilar homered, singled twice and drove in four runs to lift the Miami Marlins past the host Philadelphia Phillies 7-0 in the second game of a doubleheader on Friday.

The Phillies won the opener 5-2.

Marlins starter Ross Detwiler allowed one hit with two strikeouts and one walk in one inning of what was deemed a bullpen game.

Jordan Holloway (2-2) then tossed five scoreless innings to earn the win. He didn’t allow a hit, struck out six and walked two.

The Marlins jumped out to a 2-0 lead in the first inning when Marte launched a two-run home run to center field. 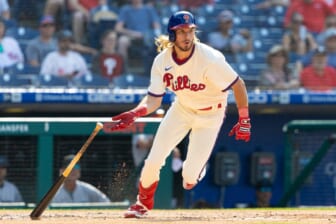 Miami extended its advantage to 3-0 in the third when Aguilar ripped an RBI single to left-center. Philadelphia’s Rhys Hoskins saved two more runs with a diving stop at first on a sharp grounder by Sandy Leon to end the inning. The Marlins had runners at second and third when Leon came to the plate.

The Phillies managed just one hit through the first three innings, a double by all-star J.T. Realmuto.

Marte’s third hit, an RBI double in the fourth, gave the Marlins a 4-0 lead. After Eflin was replaced with Enyel De Los Santos, Aguilar blasted a three-run homer to left for a 7-0 advantage.

Hoskins led off Philadelphia’s sixth by striking out looking. McCutchen walked and Didi Gregorius lined out. Ronald Torreyes flied out to center to end the inning.