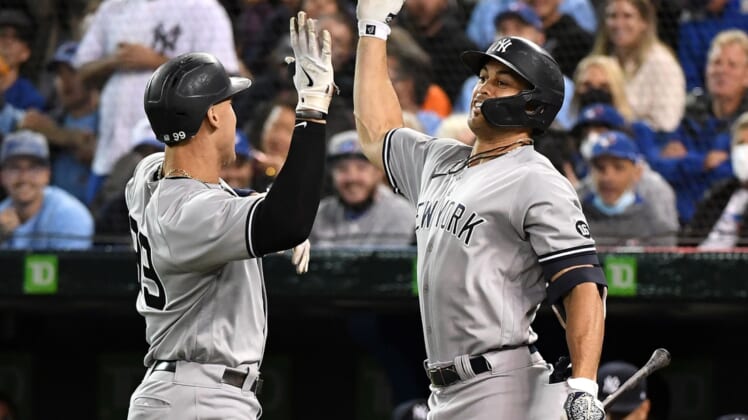 Aaron Judge hit his second of two home runs and Anthony Rizzo also hit a solo shot in the sixth inning as the Yankees won the rubber match of an important three-game series.

Brett Gardner added his 10th homer of the season, a solo drive in the ninth for the Yankees (91-68) against Julian Merryweather.

Judge hit a mammoth home run to center on the first pitch with two out in the first inning.

The Blue Jays (88-71) tied the game in the second. Bo Bichette led off with a single, stole second and scored on Corey Dickerson’s double to right. The inning ended when Judge ran in to make a diving catch of Santiago Espinal’s bloop to right.

The Blue Jays took a 2-1 lead in the fifth. George Springer singled on a line drive to shortstop that Gio Urshela could not hold. Marcus Semien forced Springer at second on a grounder to short and scored on Vladimir Guerrero Jr.’s double off the top of the center-field wall. Michael King (2-4) replaced Kluber.

Rizzo hit his 21st home run of the season, and the 250th of his career, with one out in the sixth. Judge followed with his 39th homer. Giancarlo Stanton walked and Torres hit his ninth homer of the season to give the Yankees a 5-2 lead. Trevor Richards replaced Ray.

Toronto’s Nate Pearson allowed only a walk in pitching the seventh and eighth.

Chad Green pitched around a leadoff double with three strikeouts in the bottom of the eighth.

Aroldis Chapman worked around a leadoff single with two strikeouts in the ninth.