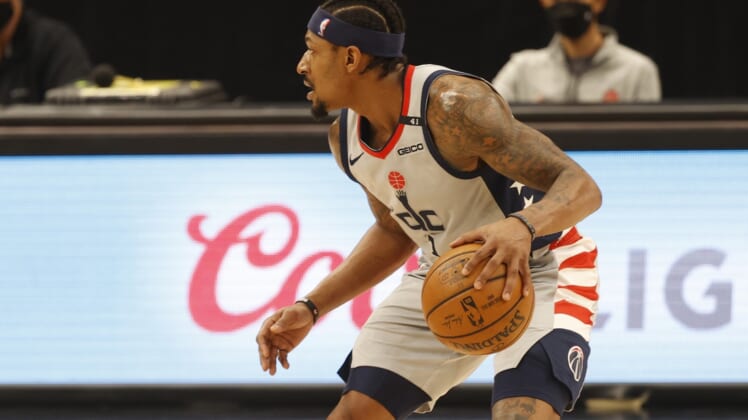 May 6, 2021; Tampa, Florida, USA; Washington Wizards guard Bradley Beal (3) drives to the basket against the Toronto Raptors during the second half at Amalie Arena. Mandatory Credit: Kim Klement-USA TODAY Sports

Washington Wizards guard Bradley Beal will miss the next two games with a left hamstring strain.

An MRI confirmed the injury and Beal will be reevaluated Friday, the team announced Monday.

Beal, 27, ranks second in the league in scoring with 31.4 points per game behind Golden State star Stephen Curry (31.9).

Beal is also averaging 4.7 rebounds, 4.4 assists and 1.2 steals in 59 starts this season, the three-time All-Star’s ninth season with Washington.

Washington (32-36) enters Monday in ninth place in the Eastern Conference. Teams finishing in seventh to 10th place qualify for the NBA’s play-in tournament. The Indiana Pacers (31-36) are in 10th, followed by the Chicago Bulls (29-39).

The Wizards play two games in Atlanta against the Hawks on Monday and Wednesday. They return home to finish the regular season with games Friday against the Cleveland Cavaliers and Sunday against the Charlotte Hornets.