It was somewhat of a surprise to learn that Scott Brooks and the Washington Wizards have opted to part ways after a five-year marriage.

This news dropped on Wednesday, shortly after Washington finished up shop on a season that saw it earn a playoff spot. After some early struggles to the regular season, the combination of Bradley Beal and Russell Westbrook caught fire. This seemed to save Brooks’ job in the nation’s capital, even after the Washington Wizards fell to the Philadelphia 76ers in the first round of the NBA Playoffs.

The focus now turns to who Washington might look at as a replacement for Brooks. There’s a number of qualified candidates already being bandied about. However, the Wizards’ brass also must take into account Beal’s opinion in order to help facilitate a long-term relationship between the star guard and his organization. Below, we look at four ideal candidates.

This one almost seems too obvious. Already a candidate for multiple head-coaching openings, a time will soon come when this longtime San Antonio Spurs assistant gets her chance. One of the most widely-respected assistants in the game, the 44-year-old Hammon has served in that role under the legendary Gregg Popovich for the past seven seasons.

What makes Hammon such an interesting candidate for Washington’s now-vacant job is how well she has worked with guards in the past. That’s included the likes of Tony Parker, Patty Mills, Dejounte Murray and Derrick White with San Antonio. She’s almost the perfect fit in D.C.

If Washington’s brass wants to have a seamless transition from Brooks to another head coach, promoting his top assistant to that role could make some sense. The 60-year-old Brown has served as Brook’s associate head coach since back in 2016. He has experience as an assistant in the NBA dating back to 1997.

A former draft pick of the then-New Jersey Nets back in 1982, Brown had previously served under the likes of Rick Carlisle (Detroit Pistons), Lenny Wilkens (Toronto Raptors) and Doc Rivers (Boston Celtics). That’s some pedigree right there. He also has some head-coaching experience stemming from a stint as the Brooklyn Nets’ interim head man back in 2015-16.

An assistant in Washington from 2005-11, Unseld Jr. is now one of the top candidates for the Wizards’ job. This makes sense in that he’s been the top assistant with the Denver Nuggets since all the way back in 2015 and should soon earn a top gig around the NBA.

The interesting dynamic here is that this would be a return to a previous era in Wizards history when the legendary Wes Unseld Sr. coached the then-Bullets from 1987-1994. While his tenure in the nation’s capital did not go too swimmingly (202-345 record), there’s every reason to believe that his son can have success in D.C. should the Wizards go in that direction.

Despite the Portland Trail Blazers’ struggles in the playoffs under Scotts, he did oversee the maturation of star guards C.J. McCollum and Damian Lillard. That’s one of the primary reasons the veteran head coach is getting play as a candidate despite just recently being fired by Portland. 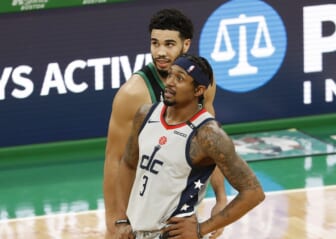 Stotts’ success speaks for itself. He earned a playoff appearance in each of his final eight seasons with the Blazers. An NBA coach since all the way back in 1994, Stotts also posted a tremendous 402-318 record in that role. With the Washington Wizards likely wanting to cater to Bradley Beal, this could very well be an underrated candidate for their newly-vacant job.