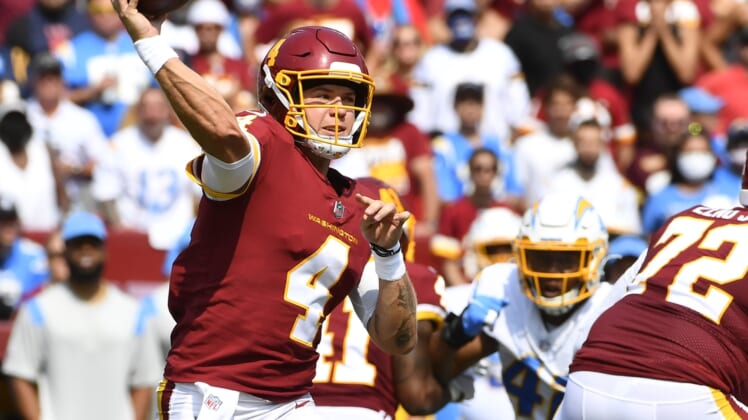 Taylor Heinicke is about to get an extended run as an NFL starter for the first time.

The 28-year-old quarterback was elevated to starter because of Ryan Fitzpatrick’s hip injury in the season opener, so Heinicke will lead the Washington Football Team (0-1) into action against the New York Giants (0-1) on Thursday night at Landover, Md.

Fitzpatrick is forecast to miss up to eight weeks, which presents time for Heinicke to display his skills. Heinicke will be making his second career regular-season start, with Kyle Allen (1-3 in four starts for Washington in 2020) serving as the backup.

Washington coach Ron Rivera also had both Heinicke and Allen on his roster during his tenure with the Carolina Panthers but didn’t struggle to make the decision.

That could be due to Heinicke’s stellar playoff start last season, when he filled in for injured Alex Smith and passed for 306 yards and accounted for two touchdowns (one passing, one rushing). His efforts allowed Washington to scare the eventual Super Bowl champion Tampa Bay Buccaneers before falling 31-23 in an NFC wild-card game.

Heinicke replaced Fitzpatrick during Washington’s 20-16 home loss to the Los Angeles Chargers in Week 1 and completed 11 of 15 passes for 122 yards and a touchdown while rushing three times for 17 yards.

Heinicke played college football at Old Dominion and passed for nearly 15,000 yards and 132 touchdowns as a four-year starter. Despite the big numbers, he went undrafted in 2015.

He spent time on the practice squads of the Minnesota Vikings, New England Patriots and Houston Texans over the next three seasons and even completed one pass for the Texans in 2017.

He made his first career start in 2018 for the Panthers but was out of football last December when Washington added him to the practice squad. Then, he was needed for the team’s biggest game.

Heinicke certainly acted like a starter when he addressed the team after Tuesday’s practice.

“I went in there and said a couple of words that I probably shouldn’t say right now about these Giants,” Heinicke said. “Hopefully it got the guys fired up and ready to play for Thursday.”

New York looks to rebound after being whipped 27-13 by the visiting Denver Broncos in its season opener.

Star running back Saquon Barkley returned from an ACL injury that occurred in Week 2 of the 2020 season but had just 26 rushing yards on 10 carries. He also caught one pass for 1 yard.

Now Barkley faces a short week — tough for any running back, let alone one who just played for the first time since surgery on his right knee.

“I don’t think the schedule is ideal for coming back off a major knee injury to have two games back-to-back, but that’s what it is,” said Barkley, who was limited in practice on Tuesday. “That’s what’s in front of me and that’s the challenge I have to face.”

The Giants have defeated Washington five straight times, the last four with Daniel Jones as the starter. 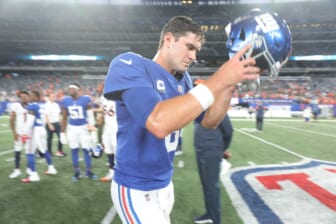 The third-year pro passed for 267 yards and one score and also rushed for a touchdown against the Broncos. However, he also lost a fumble that led to a Denver field goal.

“Turnovers are always going to hurt you at any point in the game and they’re big plays,” said Jones, whose 30 fumbles and 18 fumbles lost are the most in the NFL since he entered the league in 2019. “We’ve got to do a good job of taking care of the ball.”