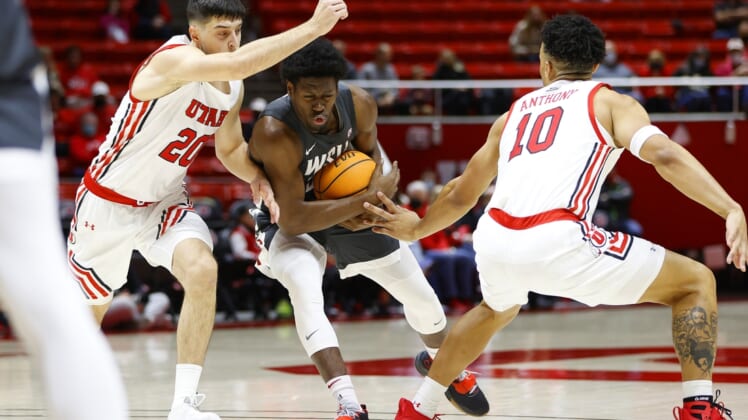 Michael Flowers added 12 points and six assists, Noah Williams and Mouhamed Gueye each scored 11 and Andrej Jakimovski had 10 points and seven rebounds for the Cougars (9-6, 2-2 Pac-12), who snapped a two-game losing streak.

Williams, Washington State’s second-leading scorer, rejoined the team after missing Thursday’s 83-78 loss at Colorado while in the COVID-19 protocol. He added six rebounds and three assists in a reserve role.

Both Gach came off the bench to score 15 points for the Utes (8-8, 1-5), who have lost four straight. David Jenkins Jr. and Marco Anthony added 10 points apiece. Gach was dropped from the starting lineup Thursday and was held scoreless in nine minutes of a 74-68 loss to Washington.

A driving layup by Roberts gave the Cougars a 55-36 advantage with 13:34 remaining, their largest lead of the game. Roberts scored 11 points in the second half.

The Utes followed with an 8-0 run, with treys from Riley Battin and Jenkins, but they were unable to get closer than eight points the rest of the way.

The Utes used a 10-0 run to take an 18-13 lead with 10:58 left in the first half. Anthony sparked the run with a 3-pointer and Jenkins capped it with three free throws after being fouled on a long-range attempt.

The Cougars immediately responded with a 9-0 run to regain the lead. DJ Rodman and Roberts made back-to-back 3-pointers and Gueye converted a three-point play to put Washington State up 22-18 with 9:05 remaining in the half. A 3-pointer by Jakimovski with 4 seconds left in the half gave the Cougars a 10-point cushion.