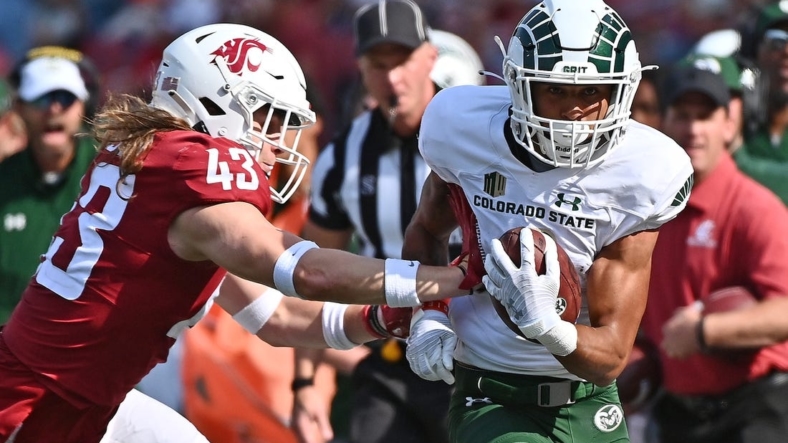 Cam Ward completed four touchdown passes in the first half and threw for 292 total yards in Washington State’s 38-7 win over visiting Colorado State on Saturday at Pullman, Wash.

Washington State is 3-0 for the first time under a first-year coach (Jake Dickert) since Mike Price started 4-0 in 1989.

Colorado State (0-3), in its first season under coach Jay Norvell, experienced difficulty stopping Ward and the Cougars’ offense from the outset.

Washington State sputtered in the second half, however, after building a 28-0 lead by halftime. The Cougars scored on their first four drives of the game. Those scores included Ward’s touchdown passes of 17 and 2 yards to Donovan Ollie, and 13 and 19 yards to De’Zhaun Stribling.

Ward completed 26 of 36 pass attempts with one interception in the game.

Colorado State had 82 yards of total offense in the first half and finished with 248 in the game. The Rams rushed for 37 yards.

Washington State tallied seven sacks, three by Daiyan Henley, a linebacker who transferred from Nevada, where he played for Norvell.

Colorado State’s Clay Millen threw for 211 yards with a touchdown and an interception while completing 24 of 34 attempts.

Washington State appeared it was going to drive for another touchdown to start the second half with Ward’s successive completions of 25 yards to Stribling, 18 to Ollie and 27 to Lincoln Victor to the Colorado State 5.

The Rams’ defense limited the Cougars to a 22-yard field goal by Dean Janikowski with 13:15 left in the third quarter that increased the lead to 31-0.

Neither offense could sustain a scoring drive after that until 11:07 remained in the game when Colorado State went 70 yards in 10 plays, capped by Millen’s 14-yard touchdown pass to Justus Ross-Simmons.

Washington State’s possessions in the second half after the made field goal included two punts, a turnover on downs and an interception thrown by Ward before Kannon Katzer scored on a 1-yard run with 1:09 left.