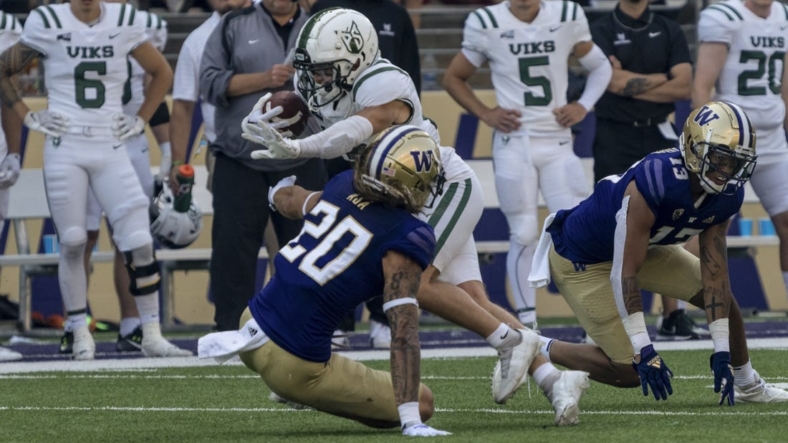 Coming off a 45-20 romp over Kent State in the opener last week, Washington (2-0) continued to put up big offensive numbers at the expense of the Vikings (0-2) as the Huskies prepare to host nationally ranked Michigan State next week.

Penix threw touchdown passes of 12 yards to Ja’Lynn Polk and 84 yards to McMillan en route to a 31-3 halftime advantage. Cameron Davis and Wayne Taulapapa ran in from 8 and 6 yards out, respectively, for Washington’s two other touchdowns in the half.

Will Nixon had a 4-yard TD run and Davis scored for a second time, this one from 3 yards out, in the third period, before Washington completed its scoring on a 2-yard dash by Denzel Boston with 5:12 remaining in the game.

Penix finished 18-of-25 passing with one interception. McMillan totaled 127 yards on just four catches, while Giles hauled in six balls for 105 yards.

Taulapapa was the game’s leading rusher with 94 yards on 12 carries. Davis (70) and Richard Newton (59) also topped 50 yards rushing for the hosts, who outrushed Portland State 241-81.

Peyton Henry added a 32-yard field goal for Washington, while Gianni Smith did all the scoring for Portland State with a 23-yard field goal in the second quarter and a 40-yarder in the third.

Jalynnee McGee was the biggest offensive force for the Vikings with 58 yards on 12 carries. Quarterback Dante Chachere threw for 50 yards on 6-of-17 passing with no touchdowns or interceptions.

The Huskies’ win was their third straight by a total margin of 145-22 in their all-time rivalry with Portland State.