The Washington Football Team’s quarterback situation has been unstable over the past season-plus, but Taylor Heinicke has proven to be a pleasant surprise at every turn during that span.

After an impressive spot start in the playoffs against the Tampa Bay Buccaneers, Heinicke was pressed into action in Week 1 when Ryan Fitzpatrick suffered a hip injury. On Thursday, Heinicke orchestrated a game-winning field goal drive against the NFC East rival New York Giants to help Washington avoid a 0-2 start.

Asked whether or not he felt he earned the opportunity to be the Football Team’s QB1 for the remainder of the 2021 campaign, Heinicke didn’t hesitate whatsoever, per The Washington Post‘s Nicki Jhabvala:

Heinicke was an unheralded journeyman QB prior to last season. His brief stint in Carolina with Washington head coach Ron Rivera was the only reason he even got a look at the NFL in 2020, not to mention an unimaginable cascade of events.

First-round bust Dwayne Haskins got released last year, and the Football Team started Alex Smith off a life-threatening broken leg before he got hurt again. Kyle Allen saw action, too, before going down with a season-ending ankle injury.

Sheer chaos. However, the green Heinicke was unfazed by it all, and stood in against the eventual Super Bowl champs in the postseason and held his own. That’s obviously served as a springboard for him into 2021.

Facing the Los Angeles Chargers in the 2021 season opener was no easy task. It seemed Fitzpatrick was destined to start for the entire year, and Heinicke would be a capable backup in case any emergency arose.

Well, Heinicke rose to the occasion yet again, and in Week 2, threw for 336 yards against a relatively stellar Giants secondary.

The Football Team’s defense is regarded as one of the NFL’s best, and stability on offense is about all Washington needs to repeat as NFC East champions. Preferably, this time it’ll mean a record than two games below .500 to get the job done.

It would’ve been easy for Heinicke to panic versus New York. He went 3-and-out on his first two possessions, and Washington’s typically stout D struggled to contain the G-Men despite Big Blue’s porous, thin offensive line. Instead, Heinicke is actually proving to be a legitimate starting-caliber player. 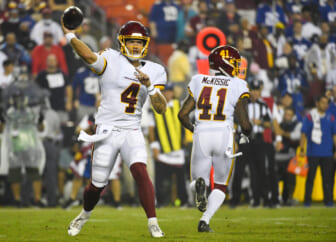 Fitzpatrick is going to miss approximately half the season. He could return to action, but the good news is, he’s seen more than just about any QB in his career between all his stints with different teams. On the Miami Dolphins last year, Fitzpatrick gracefully navigated a controversial situation as the team slowly brought along then-rookie Tua Tagovailoa.

Getting benched in favor of Tagovailoa was a shock to Fitzpatrick’s system. He was supposed to be the man in 2021 in the nation’s capital. He still could be. The great news is, Heinicke can more than hold the fort down until Fitzmagic returns. Or, better yet, Heinicke may seize the job and never look back. He’s not lacking for confidence, that’s for sure.

Will Taylor Heinicke carry Washington to an NFC East title? Read our NFL playoff predictions now to find out