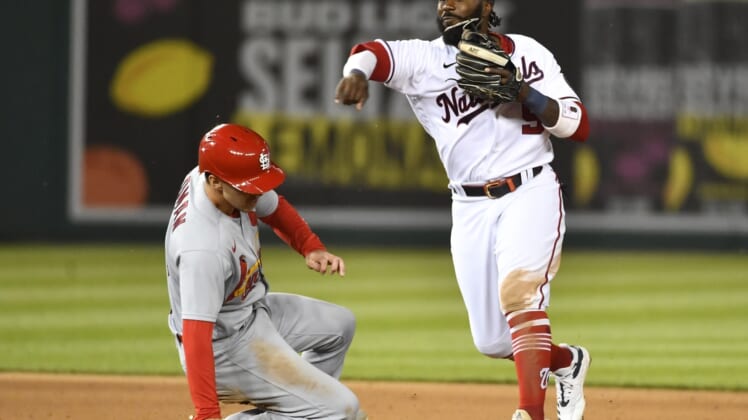 Trailing 2-1, the Nationals scored two runs on one hit in the eighth.

Andrew Stevenson led off with a walk against Giovanny Gallegos (2-1) who then hit Josh Harrison with a pitch. Trea Turner singled to right on an 0-2 pitch, scoring Stevenson to tie it and sending Harrison to third.

After Turner stole second, Josh Bell grounded out and Kyle Schwarber was intentionally walked. Gallegos then struck out Starlin Castro struck out … but walked Gomes on four pitches, forcing in the go-ahead run.

Nationals reliever Daniel Hudson (2-0) had pitched a scoreless eighth inning and got the win, and Brad Hand worked the ninth for his second save.

Bell homered for the Nationals.

Washington starter Patrick Corbin who entered the game 0-2 with a 21.32 earned run average, pitched six shutout innings, allowing four hits and no walks while striking out five. He retired 13 of the last 14 hitters he faced and was lifted after 76 pitches.

Cardinals starter Adam Wainwright gave up a run on five hits. He struck out ten and walked one while throwing 100 pitches.

Before the game, Washington placed outfielder Juan Soto on the 10-day Injured List with a strained left shoulder and recalled Yadiel Hernandez from the team’s alternate training site. Soto was hitting .300 with two homers, eight RBIs and 11 runs scored, but was 1-for-18 over his past four games.

With one out in the sixth, Bell gave the Nationals a 1-0 lead when hit a first-pitch curveball just over the wall in right for his first homer as a National.

The Cardinals took the lead in the seventh. Yadier Molina led off with a walk against Tanner Rainey, and Dylan Carlson tripled off the center-field fence. Carlson scored on a fly to left by Austin Dean for the 2-1 St. Louis lead.