A $10,000 reward is being offered for information that leads to the arrest and conviction of people or persons who carried out a shooting Saturday night outside Washington Nationals Park in Washington, D.C.

Three people sustained non-life-threatening gunshot wounds in the incident — a woman who was outside the stadium and two men who sought treatment at a hospital later, police said.

About 9:30 p.m. local time, as the game between the Washington Nationals and San Diego Padres was about to enter the bottom of the sixth inning, players and fans inside the stadium could hear the gunshots. They weren’t sure at first where they were coming from, but later learned they originated from outside in the 1300 block of South Capitol Street, Southwest.

The game was suspended and concluded Sunday afternoon, with the Padres winning 10-4. 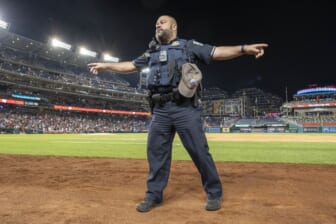 Nationals and Padres personnel spoke Sunday before the resumption of the suspended game, which was followed by the regularly scheduled game, about the events of Saturday night.

Several Padres family members made the trip to Washington, D.C. And in the aftermath of the shooting, as officials were trying to figure out just what had happened, the San Diego players headed to find their family members seated along the third-base line and usher them onto the field and into the dugout for safety. Fans followed.

On the first-base side of the field, manager Dave Martinez made sure stadium security got players and their families into the clubhouse, then turned to help the fans who had packed into the Nationals dugout.

“For me, they’re family. They’re our fans,” Martinez said. “They sweat just like the players do, just like I do. They’re here for us. … It was a reactionary thing. There wasn’t really much — I just wanted to make sure that everybody was safe.”

“I love this city. This city’s my home,” Martinez continued. “It can get crazy — we all know that — and we all want to feel safe. I can tell you that inside this ballpark, I feel safer than ever, I really do. We care about each other. We don’t want anybody getting hurt. For me, yesterday, I tried to protect as many people as possible.”

Padres manager Jayce Tingler lauded the players for the action they took to help others.

“I couldn’t be any more proud to be a Padre, to be with the men in there,” Tingler said. “Obviously they’re going out, they’re thinking of their loved ones, they’re getting their families. And then — it’s just human nature, seeing fans, seeing people in panic — they did the right thing.

“They obviously thought the safest place from where the shots were — and you don’t know what’s going on — they thought maybe the dugout could’ve been the safest place, and they led and welcomed and guided.”

As the investigation continues, the Metropolitan Police Department said Sunday it is searching for a gray Toyota Corolla with a missing hubcap on the rear driver’s side wheel and dark tinted windows in connection with the incident. The vehicle is believed to have a temporary Virginia license plate.