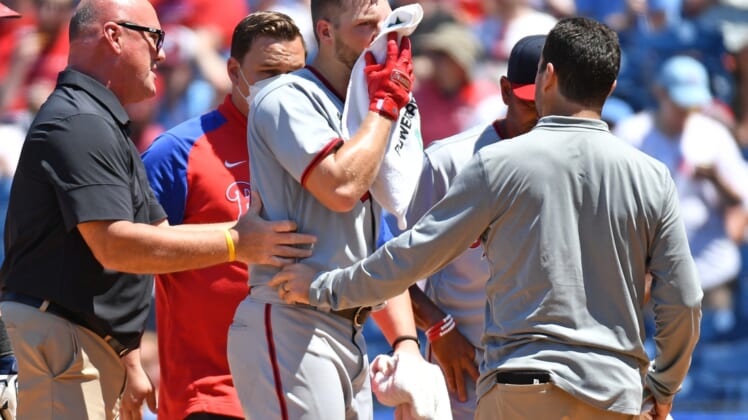 Jun 6, 2021; Philadelphia, Pennsylvania, USA; Washington Nationals starting pitcher Austin Voth (50) is helped off the field after being hit in the face by a pitch against the Philadelphia Phillies at Citizens Bank Park. Mandatory Credit: Eric Hartline-USA TODAY Sports

Washington Nationals pitcher Austin Voth left Sunday’s game against the Philadelphia Phillies after he was hit in the face by a Vince Velasquez pitch during his third-inning plate appearance.

The ball appeared to make contact with Voth’s helmet before hitting his nose.

As Washington’s medical staff attended to his bleeding nose, Voth knelt over home plate for several minutes. With a towel pressed to his face, Voth was able to walk to the locker room under his own power.

The severity of the injury is unknown. Voth struck out two in his two innings on the mound.

Voth, 28, was making his first start of the season in place of Stephen Strasburg, who is currently on the 10-day injured list with a neck strain. In 18 appearances this season entering Sunday, Voth was 2-0 with a 2.93 ERA.