The Washington Nationals announced a flurry of roster moves Thursday following a COVID-19 breakout that forced the postponement of Wednesday night’s game against the Philadelphia Phillies.

Catcher Yan Gomes and right-hander Tanner Rainey were reinstated from the 10-day injured list, while infielder Luis Garcia and right-hander Andres Machado were recalled from Triple-A Rochester in corresponding transactions. 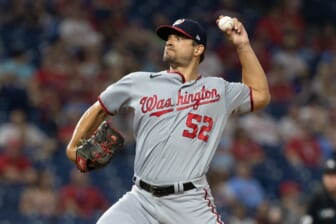 The Nationals optioned catcher Tres Barrera to Rochester on Wednesday.

In addition to four players, eight staff members for Washington also tested positive for the coronavirus.

Wednesday’s game is being made up as part of a doubleheader Thursday starting at 12:05 p.m. ET.

Gomes had been out since July 10 with a right oblique strain. He is batting .266 with eight homers and 33 RBIs in 61 games.

Rainey landed on the IL on June 29 with a stress reaction in his right tibia. He is 1-2 with a 6.93 ERA in 30 bullpen appearances.