Washington Nationals get trio of players back, top Cardinals in St. Louis 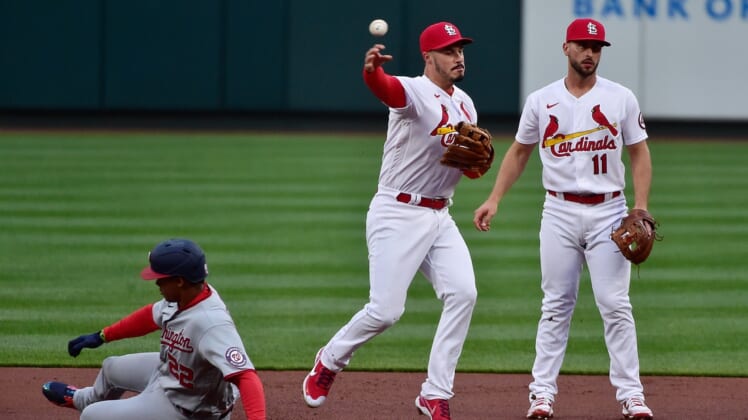 Andrew Stevenson hit a pinch-hit homer and Juan Soto had three hits to lead the visiting Washington Nationals to a 5-2 win against St. Louis Cardinals on Monday.

Kyle Schwarber and Yan Gomes had two hits each as Washington snapped a five-game losing streak.

Schwarber, Josh Bell and Josh Harrison, who each missed the first six games following a COVID-19 outbreak on the team, returned from the injured list and made their season debuts, going a combined 4-for-12.

Yadier Molina hit his second home run of the season for the Cardinals.

Kyle Finnegan (1-0), who allowed a run in 1 1/3 innings of relief, got the win. Brad Hand worked around a single and a walk in the ninth for his first save.

The Nationals jumped out to a 1-0 lead when Victor Robles tripled on the first pitch of the game and scored on a single by Soto.

The Cardinals tied in the third. Matt Carpenter led off with an infield single, went to second on Gant’s sacrifice bunt and scored when Tommy Edman grounded a single to right.

Soto singled to open the sixth and Bell drew a walk. Schwarber followed with a double to right center, scoring Soto. Bell scored when Starlin Castro fouled out down the right field line to give the Nationals a 3-1 lead.

Molina homered in the sixth to pull St. Louis within 3-2, but Stevenson’s pinch-hit homer leading off the seventh against Giovanny Gallegos made it 4-2.

Washington added a run in the eighth when Bell walked, Schwarber singled and Castro followed with an RBI single to left scoring Bell, who reached base three times.