Washington Football Team vs Panthers: Return of Ron Rivera, plus an appearance from Super Cam

Ron Rivera ought to know how Cam Newton‘s presence can create a big buzz.

Already, the Washington Football Team‘s visit to Carolina to take on the Panthers was ripe with storylines.

Now Sunday afternoon’s game in Charlotte, N.C., has another layer of intrigue because Newton will be back for his first home game since rejoining the Panthers.

Washington Football Team vs Panthers: Cam Newton gets his shot at revenge

“Every practice rep is starting to get us a little closer,” Panthers coach Matt Rhule said of the offense clicking into gear. “They’re starting to build that chemistry.”

Rivera spent nine seasons as the Panthers coach, going 76-63-1. He and Newton were at the forefront of the 2015 Carolina team that reached the Super Bowl.

Newton is back, returning last week and playing a limited role in Carolina’s upset of the Arizona Cardinals.

“Cam was brought here to help us win,” Rhule said. “He helped us win last week. … Now he has a full week worth of work.” 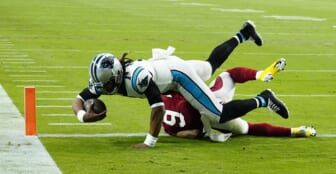 He’s likely to be the starting quarterback as the Panthers (5-5) try to build on the momentum from that result.

“We brought Cam here to play, there’s no doubt about that,” Rhule said. “We’ll get him up to speed as much as possible.”

Still, the Panthers received a solid outing from P.J. Walker in his starting role. The quarterback shake-up came about because of an injury that sidelined an already struggling Sam Darnold.

Newton is already credited with bringing a boost.

“Just his energy, the swag he brings,” Panthers defensive back Donte Jackson said. “The upbeat energy. Everybody wants to go out there and have fun when you have a guy like that on your side.”

So, it looks like the NFL version of homecoming. Newton is back. Rivera is stopping by, and there are more than a dozen staffers with the Washington team with Panthers connections. Eight Washington players are ex-Panthers.

One of them is Washington quarterback Taylor Heinicke. He’ll recognize some ex-teammates on the Carolina defense, which has been one of the top units in the NFL this season.

“I feel we’re one of the physical defenses,” Panthers linebacker Shaq Thompson said. “To be a part of this defense is amazing.”

Rivera was fired by the Panthers during the 2019 season. He said he has many fond memories from his team with the organization.

“There is no bitterness,” Rivera said. “If anything, it’s missing the folks and friends we had in Charlotte.”

Washington (3-6) ought to have plenty of spunk after a rare victory.

Newton won’t have Chase Young chasing him. The 2020 NFL Defensive Rookie of the Year is out for the season after injuring his right knee in the Tampa Bay game last week.

That changes the dynamics on the defensive side for Washington.

“You do lose the threat of that type of player coming off the edge,” Rivera said. “We are going to have to blitz, probably do some different things.”

Washington will have to deal with Carolina running back Christian McCaffrey. He had a solid outing last week with 161 yards from scrimmage as a ball carrier and receiver.

Washington leads the series 9-7 but holds a 3-4 mark in Charlotte. Carolina won 20-13 last year on the road.