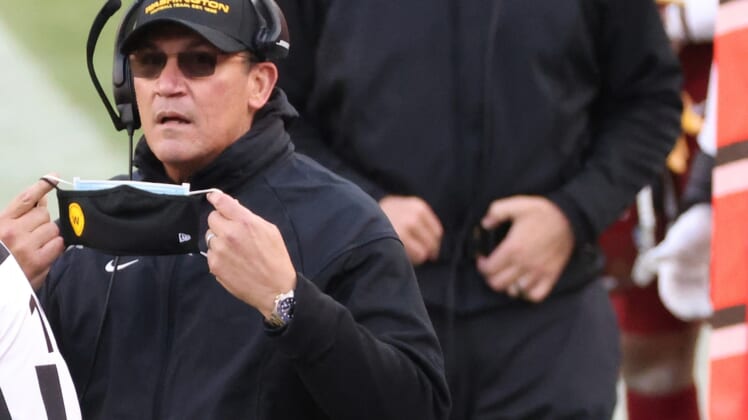 Five months after Washington Football Team coach Ron Rivera shared that he was undergoing cancer treatments, members of his family celebrated online Thursday that he has won his battle with cancer.

Rivera’s daughter, Courtney, works with the team’s social media, and she tweeted Thursday that she had “just gotten off the phone with mom and dad leaving the hospital @RiverboatRonHC is officially cancer free!!!”

Rivera announced on Aug. 20 that he was diagnosed with squamous cell cancer and needed to undergo nearly two months chemotherapy and proton therapy during the season. His treatment lasted until Oct. 26, but even though his energy levels were sapped during the process, he missed only three practices and never missed a game as his team captured the NFC East Division championship.

Although Ron Rivera and the team did not comment publicly Thursday, his wife, Stephanie, tweeted that, “Prayers have been answered. Thx to all the Drs & nurses who “Coached up” @RiverboatRonHC and me and gave us the winning game plan to defeat cancer. The PET scan said it all, cancer you lost this fight! #RiveraStrong.”

“I was amazed. Usually our patients, halfway in, stop working,” Dr. John Deeken, the medical oncologist and president of the Inova Schar Cancer Institute, told ESPN in November. “Most of our patients toward the end of their treatment are very close to needing to be hospitalized because there are so many complications.”