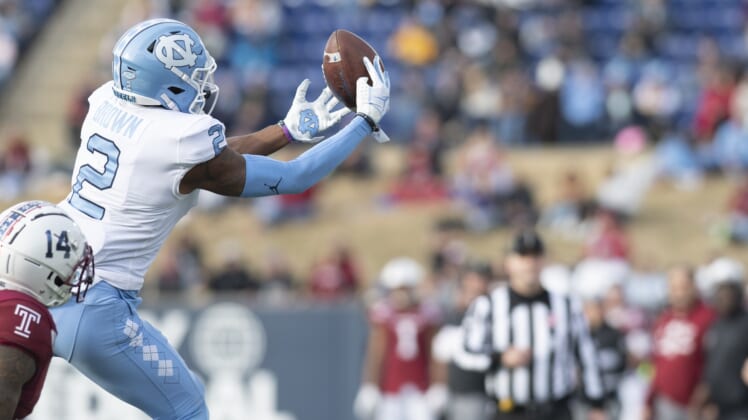 The Washington Football Team drafted North Carolina Tar Heels wide receiver Dyami Brown with the 82nd overall pick in the third round of the 2021 NFL Draft on Friday night.

Brown, standing at 6-foot-1, capped off an impressive tenure with the Tar Heels this past season. Operating as the go-to target for quarterback Sam Howell, the projected No. 1 pick in the 2022 NFL Draft, Brown routinely made easy work of ACC defenses every Saturday.

Rated as the No. 42 prospect on our 2021 NFL Draft big board, Brown elevated his draft stock this past season. In addition to earning third-team Associated Press All-American honors, he was a first-team All-ACC selection after leading the Tar Heels in every receiving category.

A native of Charlotte, North Carolina, Brown was a 247 Sports’ four-star recruit and signed with the Tar Heels as part of the 2018 recruiting class. Rated as the No. 8 athlete at the time, Brown outplayed many of the players ranked above him.

Dyami Brown immediately finds himself in a nice landing spot. While he operated as the vertical threat in North Carolina’s offense this past season, this is a wide receiver capable of contributing in a variety of roles. In Washington’s offense, offensive coordinator Scott Turner will find ways to get him the football.

While he doesn’t have a huge frame (189 lbs.), Brown plays more physical than his weight indicates. He is more than willing to get physical, especially in the air when competing for a 50-50 ball. Those are important skills that will help him see the field as a rookie, but it’s his ability to get open quickly after the snap, creating separation on slant routes and finding a passing lane for his quarterback.

Obviously, the big thing for him in Washington will be his field-stretching ability. Ryan Fitzpatrick loves to throw it deep. According to Player Profiler, he averaged nearly three deep-ball attempts per game this past season. Keep in mind, the Miami Dolphins didn’t have a true field stretcher for him to work with.

Terry McLaurin is the star of this receiving corps and Curtis Samuel will play a prominent role, working underneath and being moved all around. That still leaves a spot on the outside, opposite McLaurin. Brown will constantly face angle coverage and that’s a matchup he can take advantage of in his rookie season.