The Washington Football Team signed former Dolphins defensive back Bobby McCain on Friday in a move that makes an already-stout defense even better.

McCain was a surprise cut by Miami, as he was well-respected in the locker room as a mentor for the relatively young team. His high football IQ played rather well in the secondary of Dolphins coach Brian Flores’ defensive system.

However, once Miami opted to go younger on the back end with Jevon Holland at 36th overall in the 2021 NFL Draft, it seemed to suggest someone was getting the boot. It turned out to be McCain.

But the Dolphins’ loss is Washington’s gain, as McCain is another excellent piece to the Football Team’s defensive puzzle. 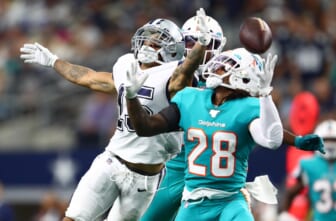 Given that McCain had to play in an exotic, complex system deployed by Flores — and before then, had to make the best of whatever was going on in Miami before Flores’ arrival — it stands to reason the 27-year-old veteran can make an immediate impression in the nation’s capital.

Prior to converting to a predominant free safety role over the past two seasons, McCain was more of a slot cornerback, and even had 421 snaps on the outside in 2018.

When McCain was at his best in that majority slot role was 2017, when he yielded only a 78.4 passer rating on 65 targets, per Pro Football Focus.

In other words, McCain can play free safety and let Washington’s Landon Collins roam around the box and the line of scrimmage, which is where he’s at his best anyway. Football Team defensive coordinator Jack Del Rio could also deploy McCain in the slot in subpackages, though.

McCain may well beat out Jimmy Moreland for the nickel cornerback job, yet he’s plenty good enough to play center field for a secondary that features Collins, prized free-agent outside corner William Jackson III and Kendall Fuller opposite him. That’s a pretty powerful quartet right there.

However the Football Team deploys McCain, he’s getting an excellent one-year prove-it opportunity for the reigning NFC East champions. With so much talent around him in the secondary and an excellent, Chase Young-led front to help the cause, this Washington defense is just looking better and better on paper.

Did the Fitzmagic connection bring Bobby McCain to the Washington Football Team?

The offense, quarterbacked by Ryan Fitzpatrick, with new weapons like Curtis Samuel and Terry McLaurin, should be improved in 2021, which should only feed the complementary football paradigm that defines so many successful teams.

You can bet that Fitzpatrick, who just played for the Dolphins himself, may have had something to do with luring McCain to Washington.

Both have excellent leadership intangibles, and are likely to be named team captains in short order. Think about how well the Fins handled their QB controversy last year when Fitzpatrick got benched for Tua Tagovailoa, and Flores kept waffling back and forth between them.

Not only did Fitzpatrick have to keep his bearings, support the rookie signal-caller, and spin it in a positive way in the locker room. McCain had to do something similar to the defense, because this was a playoff-ready team if Tagovailoa could deliver, but as the rookie took his lumps, the Dolphins knew they’d have to step up on the other side of the ball.

Overlooked in Miami, Fitzpatrick and McCain figure to be positive difference-makers for the Football Team.