The Washington Football Team rounded up several of their stars for a classic, first-day-of-school-themed social media campaign to kick off mandatory minicamp.

Thanks to some great execution and the charm and Ryan Fitzpatrick‘s majestic beard, the Football Team’s school-themed initiative was a big hit on Tuesday:

Fitzpatrick, running back Antonio Gibson, wide receiver Terry McLaurin and a couple Washington defensive players got in on the act, as they revealed their age, height (all in inches) and years of NFL experience on a classic blackboard with multi-colored chalk.

This is the type of fun-loving time we like to see as the NFL gets down to business in the thick of the offseason program, as serious preparations for the regular season commence.

Washington is coming off an NFC East title thanks largely to an excellent defense. That unit figures to be strong again in 2021, but the hope is that Fitzpatrick makes the most of being the No. 1 quarterback in the nation’s capital and lifts the Football Team to even greater heights.

Joining McLaurin in the receiving corps are free-agent acquisition Curtis Samuel and rookie Dyami Brown, which gives Fitzpatrick three viable weapons to throw to. Gibson is an excelent pass-catcher out of the backfield in his own right, and tight end Logan Thomas is an emerging star at the position.

Combine all those elements together, and it seems like the good times will keep rolling under head coach Ron Rivera in Washington.

As is the case with any franchise, much of the Football Team’s fate boils down to how well Fitzpatrick plays. He seems like the perfect leader and stabilizing force as a position where Washington trotted out four different starters last season. 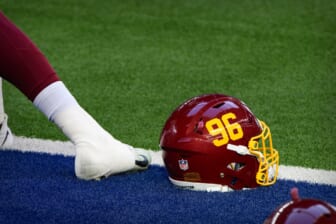