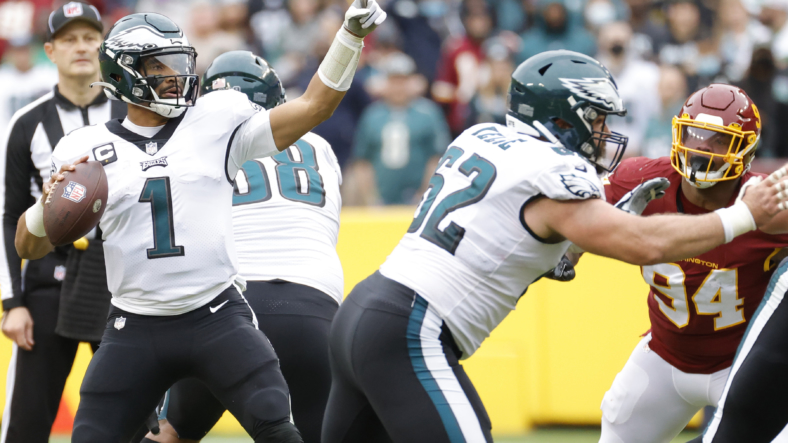 The Washington Commanders and Philadelphia Eagles are coming off very different outcomes from Week 2. While Philadelphia proved it is one of the best teams in the NFL, the Commanders fell apart against the Detroit Lions with a loss that raised signfiicant questions about the roster and coaching staff.

Expectations for the Commanders were raised following their Week 1 victory, especially with so many unexpected outcomes in the NFC. It suddenly seemed like earning a spot in the NFL playoffs was viable if everything right. A week later, many in Washington are questioning if the right personnel are in place or if changes are necessary.

As for the Eagles, no NFL team will head into Week 3 with more confidence than Philadelphia. It dismantled the Minnesota Vikings on Monday Night Football, with quarterback Jalen Hurts playing at an MVP-caliber level and the Eagles’ defense emerging as one of the best in football. All of that sets the stage for Sunday’s game.

Let’s dive into the Week 3 matchups between the Philadelphia Eagles vs Washington Commanders.

Washington is spending more on its secondary than any other positional group on its defense. According to Spotrac, the Commanders have committed 13.25% of their cap space to cornerbacks. In Week 2, the secondary allowed 116 rushing yards and two touchdowns to Amon-Ra St. Brown, with Jared Goff playing like a Pro Bowl quarterback.

Sunday will be the toughest challenge of the young season, especially for William Jackson III. Through two games in 2022, Pro Football Focus grades Jackson as the 79th-best cornerback in the NFL, allowing a 152.1 quarterback rating on 10 targets. Fuller hasn’t fared any better, surrendering 21.6 yards per reception and 108 receiving yards.

If the Commanders’ cornerbacks struggle and the blown coverages continue, this game will be a blowout. AJ. Brown (224 receiving yards) and DeVonta Smith are one of the best 1-2 receiver duos in the league today. It would also raise more questions about Jack Del Rio’s job security, given the defensive coordinator is responsible for the communication and schematic issues that have brought down Washington’s defense since 2021.

The Vikings’ defense looked great before the matchup on Monday against Philadelphia. It only took two quarters before it became apparent Minnesota had no answer for Hurts. He picked up two first-half rushing touchdowns, including a 26-yard run that saw the Vikings’ linebackers and edge defenders bite completely on the fake handoff to Miles Sanders. It left the outside completely open and Hurts did the rest.

It’s not as if the Commanders’ defense is disciplined to begin with. Linebacker Jamin Davis received a 48.6 run-defense grade from PFF last season, with indecisiveness costing him as a rookie. The coaching staff hasn’t seen the improvements it wants from in his second season and that doesn’t bode well against Philadelphia.

Washington must be prepared for one of the best dual-threat quarterbacks in the NFL. If the coaching staff doesn’t create the right game plan and the front seven fails to contain the edge, Hurts will get free and run for daylight with Commanders’ cornerbacks turned and following Smith and Brown. If the Commanders commit too many defenders to Hurts, he’ll sit back in the pocket and hit Smith, Brown or Dallas Goedert to set up YAC plays.

Carson Wentz isn’t changing. A new fan base and coaching staff watch the brilliant moments, seeing instances when Wentz looks like an All-Pro quarterback. It creates hope that the right adjustments and coaching will help him become a more consistent player. That’s never happening.

In Week 2, Wentz was pressured on 39.6% of his dropbacks and he completed just 5-of-14 pass attempts with a 3.8 ypa and a 38.7 PFF passing grade. Sunday’s matchup puts him up against an Eagles’ defense that generated excellent pressure on Kirk Cousins. Wentz won’t have the luxury of his receivers facing a weak secondary. Darius Slay, who will likely cover Terry McLaurin, recorded more interceptions (two) than receptions allowed (one) in coverage of Justin Jefferson. Philadelphia also can throw James Bradberry at Jahan Dotson with Avonte Maddox assigned to Curtis Samuel in the slot.

All of this is going to put more pressure on Wentz. He needs to limit his risky throws and reckless decision-making, because the Eagles will create takeaways in those instances. If he plays smart football and gets protected by the offensive line, Washington has a shot on Sunday. Otherwise, the Commanders could easily lose by 14-plus points.