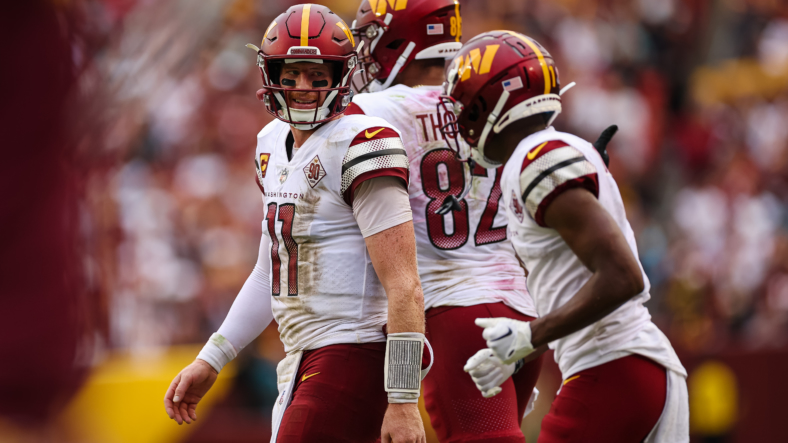 One of the best games on the Week 2 NFL schedule is a matchup between the Washington Commanders vs Detroit Lions, an opportunity for two teams to prove they are legitimate early in the NFL season.

Detroit enters as the favorite, marking the first time the odds are in their favor to win in 24 games. It’s a huge moment for the franchise which is coming off a wave of momentum from Hard Knocks. However, they are in for a challenge against an opponent that proved formidable in its Week 1 victory over the Jacksonville Jaguars.

From the Commanders’ perspective, Sunday is an opportunity. Another win would push this team to 2-0 on the young season and that could generate some buzz for this team as a threat in the NFC East. If Washington falls short, though, analysts will write off the season-opening win and cast more doubt on quarterback Carson Wentz.

Here are the three matchups that will determine Sunday’s Commanders vs Lions game.

The Lions’ offensive line is one of the best in the NFL when everyone is healthy. Unfortunately for Detroit, it’s dealing with some dire circumstances in Week 2. Pro Bowl center Frank Ragnow and starting left guard Jonah Jackson are both out on Sunday, while left tackle Taylor Decker is playing through a calf injury that significantly limited him in practice this week.

Even if Commanders’ defensive tackle Jonathan Allen (groin) can’t play Sunday, this is a matchup Washington could exploit. It generated a 26.7% pressure rate against Jacksonville and could find even more success against Detroit. Considering quarterback Jared Goff posted a 69.2 passer rating under pressure in 2021, per PFF, the Commanders can win this game if they consistently get home to Goff.

Carson Wentz vs the blitz

The Washington Commanders are accepting Wentz for who he is. The NFL MVP version of him is never coming back, he is Mr. Extremes. There will be moments when he plays like one of the best quarterbacks in the NFL and other instances where everyone questions if he even belongs on the field.

Related: 3 keys to victory for Washington Commanders vs Detroit Lions

When a quarterback’s level of play is so volatile, key factors influence their performance. Wentz ranked 13th in passer rating (102.8) with a stellar 12-1 TD-INT ratio when blitzed in 2021. It’s especially noteworthy because Detroit blitzed on 48.8% of its defensive snaps in Week 1 and used the most man coverage in the NFL.

On paper, the Commanders seem to have the advantage. The playmakers are in place to win one-on-one in man coverage and Wentz is clearly comfortable when a defense uses extra pass rushers to pressure him. It could force the Lions to alter their gameplan, creating a game of chess between Wentz and defensive coordinator Aaron Glenn.

There are few things better in sports than friends competing against one another. On Sunday, former Ohio State Buckeyes teammates Jeff Okudah and Terry McLaurin will have a battle for bragging rights in a head-to-head matchup.

It’s clear which of the former Buckeyes stars has enjoyed the better NFL career to this point. McLaurin, the 76th pick in the 2019 NFL Draft, is already one of the highest-paid wide receivers. Okudah, the 3rd pick in the 2020 NFL Draft, had to fight for a starting spot in training camp.

“It was fun, especially the early years, because I kind of got to throw him around a little bit. The physicality of the game was a little different going from high school to college. But he adapted really well. He’s a guy who’s a sponge, really just excited to get better and learn.”

This is going to be a battle between to very talented young players who each will have something to prove. McLaurin’s route-running would seemingly give him the edge, but Okudah has really impressed as of late. If the Lions’ cornerback comes out on top, it could swing the game and change the narrative surrounding his career.