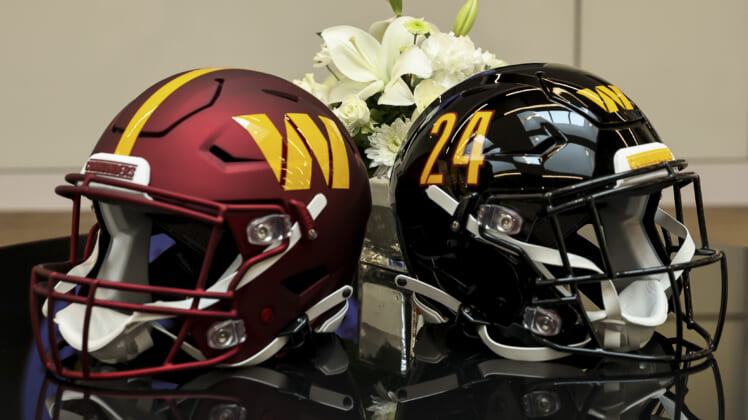 Let’s be honest. Heading into the offseason, there was already some thought the Washington Commanders wouldn’t be selecting 11th overall. This line of thinking had much to do with the idea that general manager Martin Mayhew would be targeting an elite starting quarterback.

Months later, here we are, and the Commanders still have their first-round pick, however they do also have a new QB under center with Carson Wentz getting the keys to the offense. Now with less than a week to go before April 28, when the Commanders will make the franchise’s first selection with their new team name, we look at three potential trade scenarios that could pop up during draft night.

Landing a future first-round selection thanks to QB-hungry team

Being positioned at No. 11 could be the sweet spot for the first or second quarterback selected on Thursday. This could set the Commanders to capitalize on a team looking to secure a potential franchise QB for themselves. The New Orleans Saints pick at No. 16 and 19, and the Pittsburgh Steelers pick 20th, either organization could move up the board.

If it’s the Steelers or a team picking even later, the Commanders could be looking at adding a 2023 first-round pick to their stable. Having an extra first gives them an early jump on securing their QB of the future, should Wentz not prove to be the ultimate solution, which we’ve seen before. Landing future picks is never a bad idea in the long run.

Adding more draft picks with a trade down

Teams picking below the Commanders understand they have just two picks in the top-100 selections and are likely looking to add another contributor. It may not get them a massive bounty in return, but even another pick in the second or third round could provide an immediate contributor out of the rookie class, instead of having a collective group of roster hopefuls.

The unpopular move for the Commanders would be trading way down toward the very back of the first round in an effort to land more picks, but in doing so, they also land their own future QB1. Should one of the widely-regarded top-four are still available, it’s possible the front office and scouts have one of them rated very highly. If this is the case, it makes sense to try and secure them in the first, getting the advantage of having the fifth-year option at their disposal.

As is, the Commanders nearly made the playoffs with a 7-10 record, and they’ve since added to their QB room but are they truly convinced he’s the long-term answer? We may find out otherwise on draft day.