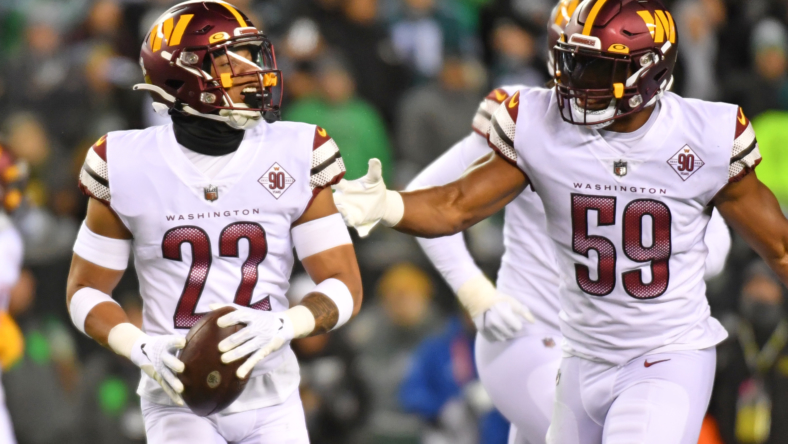 The Washington Commanders have put up a fight against the division-rival Philadelphia Eagles on the road Monday night.

Washington took a 20-14 lead at the half and extended that to a nine-point advantage after through three quarters in an attempt to hand Philadelphia its first loss of the season.

That’s when it looked like the Eagles were about to impose their will. The Eagles scored a touchdown to pull the game within 23-21 before Chauncey Gardner-Johnson intercepted Taylor Heinicke to give Philadelphia momentum.

Unfortunately, officials on hand at Lincoln Financial Field gifted Washington a turnover in the fourth quarter. Washington Commanders linebacker Jamin Davis legitimately ripped the helmet off of Eagles tight end Dallas Goedert before the latter fumbled the ball. Officials on hand somehow missed the blatant facemask, giving the Ball to Washington in plus territory in the process.

We’re not sure how officials on hand can miss such an obvious pentalty against Washington. If this had been called, Philadelphia would’ve had the ball near mid-field.

Instead, Washington got possession of it. Within a few plays, Joey Slye nailed a field goal to give the Commanders a five-point lead and make this one a bit more difficult for the home team.

Pretty much everyone outside of Philadelphia is rooting for the Washington Commanders to win this game. But you hate to see a game potentially decided by a terrible non-call from officials.