The Washington Commanders may have found a new deep route weapon in the very long form of rookie tight end Cole Turner.

The Commanders selected Turner in April with the 149th pick overall in the 2022 NFL draft. For players taken in the fifth round, like Turner, the expectations for what they can deliver in their debut season are pretty low. When making picks that deep into the annual event, teams are searching for diamonds in the rough, or projects the coaching staff can develop into highly productive players in the future.

However, it seems that the 6-foot-6 tight end from Nevada has been showing signs so far in training camp that he may be able to make an impact on the Washington offense this season. Part of the reason is sheer luck. The team’s normal starting TE Logan Thomas is still rehabbing a major ACL injury. His backup, John Bates, went down after just two practices from a calf injury. The unfortunate luck of his teammates has given Turner many more reps in practice and it seems he has done well with his extra minutes on the field.

Early reports from training camp (via the Washington Times) suggest that in recent days Turner has become a favorite target of new starting quarterback Carson Wentz. One reason is that at 6-foot-6 and 240-pounds, the 22-year-old is hard to miss. Or at least that’s what he claims his new QB has told him. “It’s kind of hard to miss me sometimes when I’m running out there. That’s what [Wentz] tells me at least,” Turner said after practice on Wednesday.

However, beyond being such a large target, head coach Ron Rivera has become a fan of Turner’s route running skills and his ability to make catches in traffic.

Turner improved every single season at Nevada and produced his best numbers during his 2021 senior year. Pulling in 62 catches for 677 yards and an impressive 10 touchdowns. 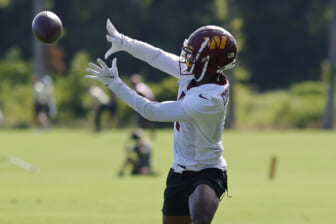