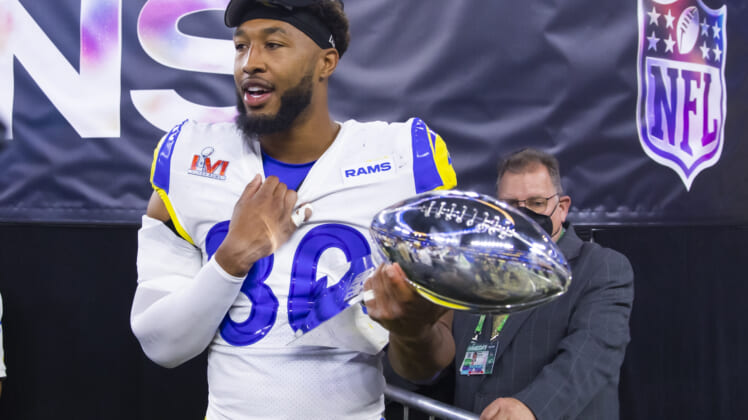 On the same day, the Washington Commanders announced Logan Thomas has been removed from the team’s Physically Unable to Perform (PUP) list, they also added another tight end to their depth chart. The starting tight end for the Los Angeles Rams in Super Bowl LVI, Kendall Blanton, has been awarded to the Commanders after he was placed on waivers by the Rams.

Other teams also tried to claim Blanton, such as the Kansas City Chiefs, but the Commanders won out due to having a worse regular season record in 2021 than the Chiefs, per waiver rules.

While Blanton was a Super Bowl starter, he’s not the typical Rams tight end. Blanton was only in the starting lineup due to injuries at the time, which is why he’s not making their final roster in 2022.

Still, as mentioned, Blanton was coveted by other teams, but now he’ll look to catch on with the Commanders instead.

The Commanders do have a need to add more tight end depth. Though Thomas’s return will help, he will take a few weeks to get up to speed. Blanton’s ready for action right away.

Kendall Blanton was key for the Rams during postseason play

A glance at Kendall Blanton’s career stats, and you can quickly see he’s not here to threaten Logan Thomas for the starting role or for playing time in any manner. Still, he is a capable tight end, and he even showed he can come up in big moments like he did for the Rams down the stretch last season.

Blanton, 26, is a massive target at 6-foot-6, 260 pounds. He’s entering his fourth season after coming into the league as an undrafted free agent in 2019, when he signed with the Rams.

Despite having just four career catches for 37 yards in regular season action, Blanton got his chance to prove himself once Rams starting tight end Tyler Higbee got hurt, opening up an opportunity for Blanton to enter the lineup.

Blanton tallied seven catches for 75 yards and a touchdown across four postseason games, and even started in the Super Bowl, helping the Rams get a ring. Unfortunately, Blanton suffered a shoulder injury in Super Bowl LVI and didn’t record any stats. But he got his ring.

He’s not expected to have a big role in Washington. First up he needs to make the roster. More cuts are being made, from 85 down to 80, but Blanton’s spot should be safe once Tuesday concludes. The bigger test will be trying to make a strong enough impression to snag a final 53 spot. They have until Aug. 30 to reduce their roster down to 53.