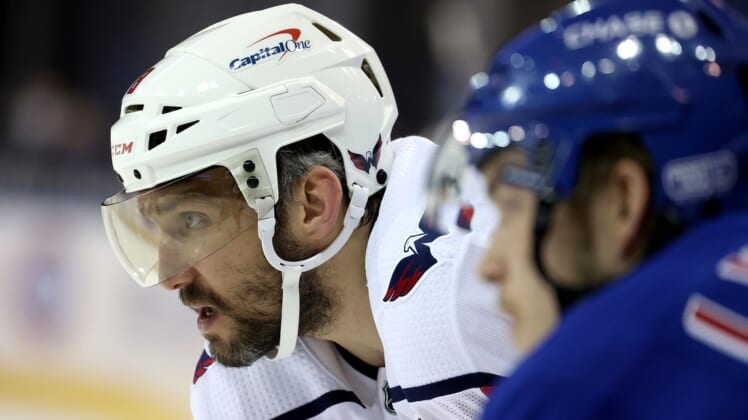 The Washington Capitals will continue their five-game trip with a game at the New York Islanders in Uniondale, N.Y., on Thursday night as both teams try to rebound after losses earlier in the week.

New York enters this matchup having lost two straight at Pittsburgh. That dropped the Islanders to 9-9-2 on the road this season. At home, though, New York is 13-1-2, and Thursday marks the opening of a six-game Islander homestand. Plus, it should be a tough test for a Washington team that’s struggled in the third period of its past two games — giving up four goals there each time.

The Caps beat the visiting New York Rangers 5-4 on Sunday but gave up all four New York goals in the third period. Washington then jumped to an early 2-0 lead in a rematch on Tuesday before the host Rangers notched one goal in the first and again scored four in the third to win 5-2.

This has been a problem at times for the Caps. They’ve blown third-period leads and still come back to win more often than not. Still, they’re searching to play a strong game all the way through.

T.J. Oshie and Nic Dowd scored in the first five minutes and gave Washington a 2-0 lead. Alex Ovechkin did not get a goal but still has 11 in his past 12 games as the Caps have won 10 times during that stretch.

On this trip, the Capitals play only the Rangers, Islanders and Devils.

The Islanders have dealt with a problem that’s opposite of the Caps. New York has found itself trailing 2-0 after the first period in each of its past three games.

That includes the team’s 2-1 loss in Pittsburgh on Monday night. Matt Martin scored a power-play goal nearly halfway through the second period, but it was not enough.

That broke an eight-game dry spell for Martin in terms of points, and it was the last time these two teams will meet in the regular season.

“I just think we’re not getting off to the best starts,” Martin said. “We have a lot of character in our room. We eventually find our game and get to our game. There’s no quit in our game. … We have to get off to better starts. Thankfully, we’re heading home (for the next six games).”

New York coach Barry Trotz guided the Caps to the Stanley Cup championship three years ago, and certainly knows what makes them tick as several players from that group remain. Right now, though, the Islanders are fighting with Washington and Pittsburgh for the top spot in the East Division.

The Islanders made a roster move on Wednesday, sending Cory Schneider back to Bridgeport of the American Hockey League for conditioning.