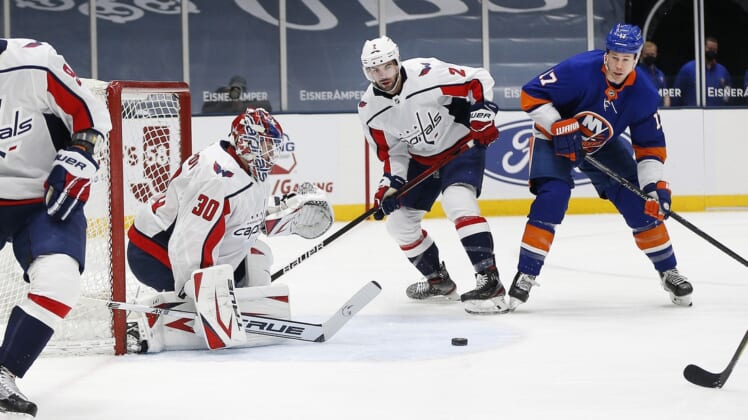 An extended stay in the New York metropolitan area is not going well for the Washington Capitals.

Coming off two poor performances in New York, the Capitals look to bounce back Friday night when they cross the Hudson River and visit the New Jersey Devils in Newark, N.J.

Washington is 6-0-0 in the eight-game season series with the Devils, and four wins were decided by one goal. On March 26, the Capitals rolled to a 4-0 home win over New Jersey when Alex Ovechkin scored twice.

Washington followed up its fifth win over New Jersey by holding on for a 5-4 win over the New York Rangers on Sunday after building a 4-0 lead. Perhaps surviving a comeback attempt was a harbinger of things to come for the Capitals, who are playing the third of five games in the New York area.

On Tuesday, Washington dropped a 5-2 decision to the Rangers after taking a 2-0 lead. Two nights later on Long Island, the Capitals were handed an 8-4 loss to the Islanders. The Capitals dropped consecutive games for the third time this season and allowed four goals in the first period after John Carlson scored 61 seconds into the game.

“I don’t think we played hard enough to win a hockey game tonight,” Capitals coach Peter Laviolette said. “Certain situational things I don’t think we did a very good job on. We just lost a game and gave up eight goals. You look to fix that and be better tomorrow night.”

Carlson scored two of the goals for the Capitals, who also got goals from Daniel Sprong and T.J. Oshie. The loss also came on a night when Oshie collided with goaltender Ilya Samsonov 30 seconds into the game.

Samsonov returned after being checked for a concussion and allowed six goals on 24 shots.

“I think we just gave them too many big chances,” Capitals defenseman Justin Schultz said. “They’ve got some skilled players over there that are going to capitalize. I think if we cut down on those, we’ll be all right. We had our chances tonight. Just got to move past it and get ready for tomorrow.”

New Jersey went 2-10-2 from Feb. 20-March 14 and then won four of five before consecutive losses in Washington last week.

The Devils followed up their fruitless visit to the Capitals by getting a split with the Boston Bruins earlier this week. After Mackenzie Blackwood made 40 saves in a 1-0 win Sunday, he allowed four goals as the Devils blew a two-goal lead in the third period and were handed a 5-4 shootout loss Tuesday.

New Jersey was unable to get the extra point beyond regulation despite getting a power play late in overtime Tuesday. Its man advantage is 0-for-10 in the past three games and 2-for-23 in the past six contests.

Kyle Palmieri scored Tuesday for the second straight game while Miles Wood, Michael McLeod and Travis Zajac also scored for New Jersey, which was outshot 19-9 in the third period.