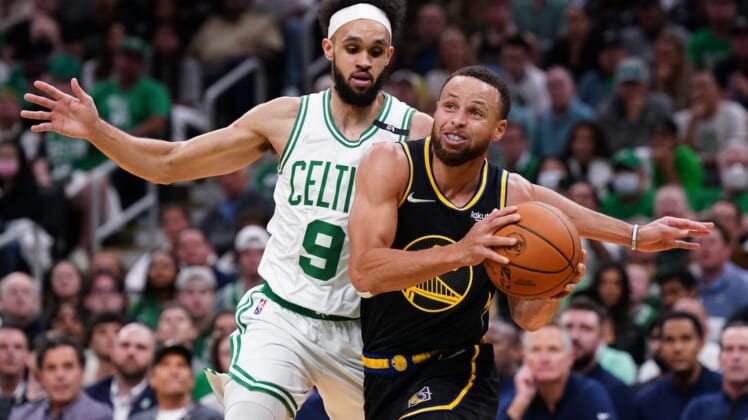 The feeling-out process is complete. All even at 2-2 in the NBA Finals, the Boston Celtics and Golden State Warriors now contest a best-of-three for the championship.

Two relatively healthy teams, inspired by previous success on Golden State’s home court and refreshed from having two days off, will duel in Game 5 in San Francisco on Monday night.

“It’s the Finals,” summed up Celtics star Jayson Tatum. “It’s not going to be easy. It shouldn’t be.

The first four games have been about as evenly contested as they get … except the final scores.

The Warriors have outscored the Celtics by a total of just 422-421, belying the fact that no single game has been decided by fewer than 10 points.

Stephen Curry has a series-best 25 of the Warriors’ 64 threes, including seven in 14 attempts in a dramatic 43-point performance that drew Golden State even in a 107-97 triumph at Boston in Game 4 on Friday.

“The heart on that man is incredible,” teammate Klay Thompson gushed. “The things he does we kind of take for granted from time to time, but to go out there and put us on his back, I mean, we got to help him out (in Game 5).”

The Warriors did that the last time the clubs met in San Francisco in Game 2. Curry had 29 points, but Jordan Poole chipped in with 17 off the bench, Gary Payton II returned from a fractured elbow to make all three of his shots, and Golden State’s four other starters combined for 43 points, 21 rebounds, 12 assists and six steals in a team effort that produced a 107-88 win.

That came three nights after the Celtics, the top road team in the postseason, temporarily stole home-court advantage by getting a similar type of balanced production in a 120-108 series-opening win. Al Horford (26), Jaylen Brown (24), Derrick White (21) and Marcus Smart (18) contributed 89 points to the cause on a night when Tatum struggled to reach 12.

The Celtics have gone 8-3 on the road in the postseason, outshooting their opponents 38.1 percent to 31.2 percent on 3-pointers.

The Warriors have gone 10-1 at home, hitting 40.7 percent of their threes as opposed to 36.3 percent by the visitors.

The biggest factor in determining winners and losers in the series has been rebounding.

Boston has held the upper hand on the boards 86-70 in its two wins, including 22-18 on the offensive end.

The opposite has been true in Golden State’s two wins, during which it has dominated the glass to the tune of 97-85, including 22-17 at the offensive end.

Having seen rival Curry at his best in Game 4, Tatum believes it’s his turn to play difference-maker.

“I just got to be better,” the only first-team All-NBA performer in the series insisted. “I know I can be better, so it’s not like I, myself or my team is asking me to do something I’m not capable of. They know the level and I know the level that I can play at.

“It’s not too much pressure at all. It’s kind of like my job.”

The story has been similar with DraftKings’ 110.5-point line, with 72 percent of the bets and handle supporting the Over.