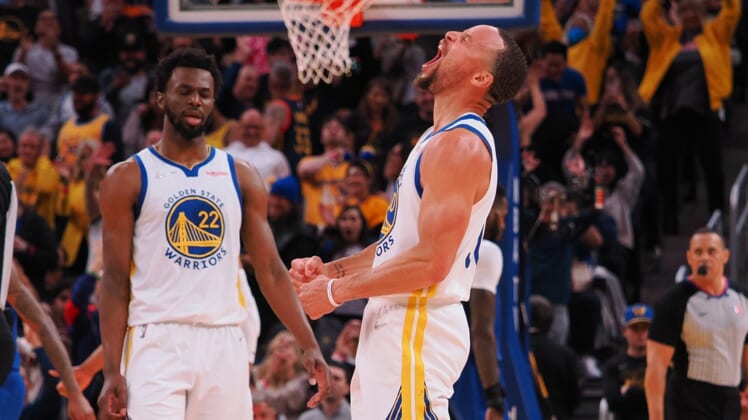 The Denver Nuggets persevered throughout the regular season, overcoming long-term injuries to two of their top three players to win 48 games.

Once the playoffs started, the absences of Jamal Murray and Michael Porter Jr. have exposed glaring weaknesses for Denver. The Nuggets lack reliable second and third scoring options behind center Nikola Jokic, and they don’t have much time to figure out how to overcome that problem.

Denver needs a win Thursday in Game 3 of its first-round playoff series with Golden State or face the possibility of being swept out of the postseason for the second straight season.

The Nuggets are 2.0-point underdogs at DraftKings and PointsBet. Denver has been backed by a measly 13 percent of the spread bets and 10 percent of the handle at DraftKings, while the opening 2.5-point line at PointsBet shifted with Golden State also drawing one-sided action at 81 and 83 percent, respectively.

The line also opened at 2.5 at BetMGM, where it has held steady despite lopsided action toward Golden State with 90 percent of the spread bets and 94 percent of the handle.

The Warriors won the first two games in convincing fashion but the Nuggets hope that coming home will make a difference.

Coach Michael Malone isn’t so sure the crowd will be overwhelmingly behind the home team.

“I imagine this place is going to be half-filled with Warriors fans,” Malone said after practice at Ball Arena. “Every time we play them that seems to be the case. But it is great to be home. It is great to be playing in front of our own fans.”

Golden State should have Andre Iguodala back Thursday night after he missed Game 2 with a neck injury. He practiced Wednesday and coach Steve Kerr said he will be available.

Denver started strong in both games in San Francisco but didn’t have an answer for the Warriors’ small lineup. Steph Curry, Klay Thompson and Jordan Poole combined for 84 of the Warriors 126 points in Game 2. About the only thing that didn’t go right was figuring out the best option to shoot technical free throws.

Curry missed two of them Monday night, a minor negative on his 34-point night.

The “death lineup,” as Golden State’s lineup of Curry, Poole and Thompson has been dubbed, works because all three can create their own shots. Curry and Thompson have experience and Poole was able to develop when those two were injured.

“He’s been watching Steph a lot, and he’s doing his best impression,” Draymond Green said. “It is incredible.”

Not only do the Nuggets have to figure out how to stop that lineup, they have to make sure they’re on the same page. Amid the frustration of Monday’s 20-point loss, DeMarcus Cousins and Will Barton got into a heated discussion heading into a timeout.

Then in the fourth quarter Jokic picked up his second technical and was ejected. The frustration was apparent with the players but Malone said Wednesday the team’s bad energy “has left their system,” and the team is “together.”

Malone said Murray won’t play in Game 3, and there was no update on Porter, which means the Nuggets need to figure out how to help Jokic. He is averaging 25.5 points, 10.5 rebounds and 5.0 assists in the two games while being guarded by multiple players.

“We’ve got to figure it out, because getting swept again, not a good look for nobody, and it’s embarrassing,” Monte Morris said. “If we’ve got any pride, we’ve got to find out real soon because it’s not going to get no easier for us.”