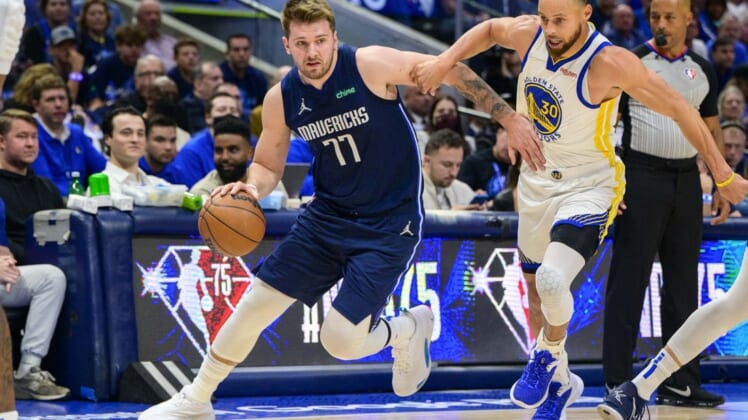 Stephen Curry poured in a team-high 31 points, Andrew Wiggins harassed Luka Doncic defensively while recording a double-double of his own, and the Golden State Warriors moved within one win of the NBA Finals with a 109-100 road win over the Dallas Mavericks in Game 3 of the Western Conference finals on Sunday night.

Wiggins finished with playoffs career-high 27 points to go with 11 rebounds and Klay Thompson chipped in with 19 points as the Warriors took a 3-0 lead in the best-of-seven series to close in on a spot in the NBA Finals for the sixth time in the last eight seasons.

Doncic had a game-high 40 points for the Mavericks, but needed 23 shots and 17 free throws in order to reach 40 for the second consecutive time in this series and eighth time in his postseason career.

Up just 48-47 after a first half in which neither team shot well, the Warriors got scoring from six different players in a 30-21 third-quarter burst to open a double-digit lead. Curry had 11 of his 31 points in the quarter, including a pair of 3-pointers.

The Mavericks, who came back from 2-0 and 3-2 deficits to eliminate top-seeded Phoenix in the second round, got as close as 89-83 with 7:16 remaining on a Davis Bertans dunk.

But Curry countered with a pair of free throws and Wiggins blew the game open with a pair of dunks, one on which he flew over Doncic for an electrifying dunk that was originally called an offensive foul but then overturned.

The Mavericks had one more run in them, closing within 104-99 on 3-pointers by Doncic and Spencer Dinwiddie with still over a minute to play, but Jordan Poole delivered the crushing blow with a 3-pointer with 54.2 seconds left to open an eight-point margin.

Curry complemented his 31 points with a game-high 11 assists, while surprise Game 2 star Kevon Looney barely missed another double-double with nine points and a game-high 12 rebounds.

Draymond Green and Poole each chipped in with 10 points for Golden State, which won a road game for an NBA-record 26th consecutive playoff series.

Doncic shot 4-for-9 on 3-pointers and Dinwiddie 4-for-10 on a 26-point night, but the Mavericks earned just a 39-33 scoring edge from beyond the arc despite taking 13 more 3-point attempts than the visitors.

Doncic also found time for a team-high 11 rebounds for the Mavericks, while Jalen Brunson was a third Dallas scorer with 20 or more points with an even 20.

The other six Mavericks who saw action combined for just 14 points.