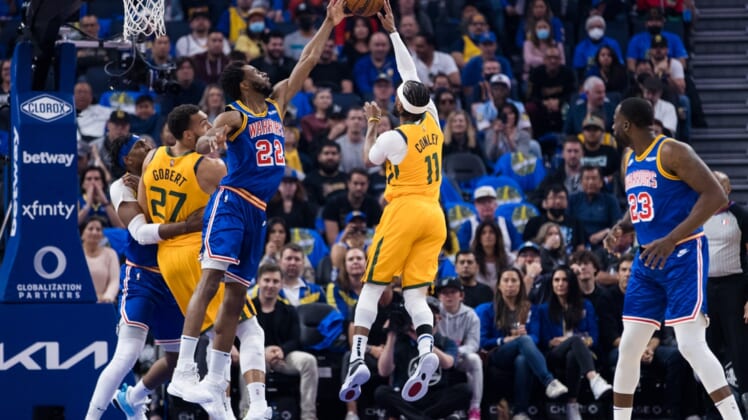 Klay Thompson bombed in 12 of his game-high 36 points in an 18-0 fourth-quarter flurry Saturday night as the Golden State Warriors rallied for a 111-107 victory over the visiting Utah Jazz in San Francisco.

The improbable win, during which they trailed by as many as 21, allowed the Warriors (49-29) to clinch a postseason berth. They increased their lead over the Dallas Mavericks (48-30) to a full game atop a four-team duel for the No. 3 seed in West.

Utah never led again, but came close when, trailing 107-106 with 49.7 seconds left, Rudy Gobert got inside the Golden State defense for a point-blank attempt. But Draymond Green blocked the shot, allowing the Warriors — with the help of two free throws apiece by Jordan Poole and Green — to hold on and snap a four-game losing streak.

Poole finished with 31 points, making six of his 15 3-point attempts. Even without injured Stephen Curry, the Warriors outscored the Jazz 60-45 from beyond the arc.

Andrew Wiggins chipped in with 17 points for Golden State, while Green had a team-high seven assists and eight rebounds to complement 10 points. Gary Payton II added 10 points off the bench as the Warriors won the season series from the Jazz 3-1.

Guards Donovan Mitchell and Mike Conley had 26 points apiece for Utah, while Gobert recorded his third double-double in three tries against the Warriors this season with 14 points and a game-high 20 rebounds. Conley also found time for a game-high eight assists.

Bojan Bogdanovic put up 17 points and Jordan Clarkson 14 for Utah, which lost despite outscoring the Warriors 16-11 at the foul line and outrebounding them 47-41.

Seeking a second straight win after losing five in a row, the Jazz bolted to a 7-0 lead and went up by as many as 10 late in the first quarter and 21 in the second.

The Warriors were still down 103-87 with 7:54 to play before using their run of 3-pointers to grab the lead for good.