Warriors owner: ‘We’re light years ahead of probably every other team’ 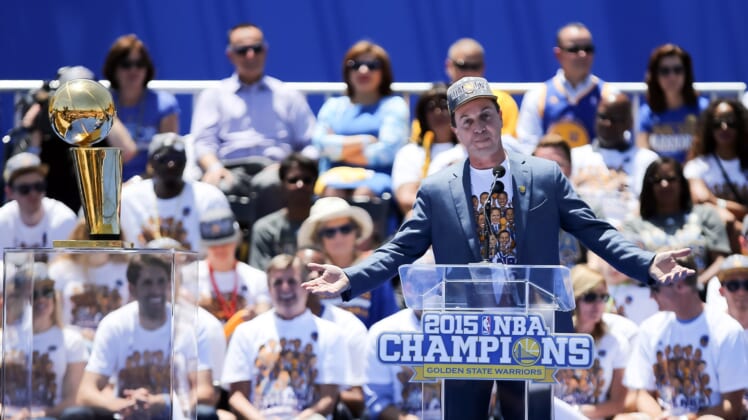 The only thing that might be more impressive than the Golden State Warriors 68-7 record is their cockiness from top to bottom.

It’s not a false sense of confidence. After all, the defending champs have posted a ridiculous 135-22 regular season record since Steve Kerr took over as head coach last year.

It does, however, rub others around the NBA the wrong way. “Act like you’ve been there before,” some say. The thing is, this organization has never been to the heights we are currently seeing. Heck, no other team has, at least from the standpoint of their regular season success over the past two years.

Lending more credence to the idea that this is a cocky bunch, Warriors owner Joe Lacob laid down some rather interesting comments in an interview with The New York Times recently:

“We’ve crushed them on the basketball court, and we’re going to for years because of the way we’ve built this team,” Lacob told Bruce Schoenfeld of The Times. “We’re light-years ahead of probably every other team in structure, in planning, in how we’re going to go about things.”

I am pretty sure Gregg Popovich and the San Antonio Spurs would politely disagree with this assessment, but I digress.

Lacob is correct with the assumption that things have changed a great deal for the Warriors from a structural standpoint since he took over as co-owner of the team back in 2010.

An organization that had existed as the laughingstock of the Association quickly turned the corner. And six years later, the Warriors are at the peak of success around the NBA.

It’s not just the talent the team has assembled on the court. It’s the genius minds, including Jerry West, it has put in leadership roles in the front office.

It’s also a sense that the Warriors have found a way to model their franchise after some of the top businesses in the nearby Silicon Valley area. That’s to say, they treat their employees, players included, better than a vast majority of the teams out there.

Chartering flights for their entire employ during the NBA Finals and doing the same for family members of players when traveling during the holidays, much like the Warriors did during Christmas time back in December of 2014. This is all a representation of an organization that gets it.

“The great, great venture capitalists who built company after company, that’s not an accident.” Lacob continued. “And none of this is an accident, either.”

With continuity from the top down and one of the best front offices in sports, the Warriors have become a guiding light for other organizations around the sports world to strive for.

This doesn’t mean that comments similar to the ones Lacob made in that New York Times piece won’t be taken the wrong way.

People tend to be envious of winners. But more than that, they hate winners that gloat. Unfortunately for those people, the Warriors aren’t going away any time soon.