Warriors look to clinch series vs. Nuggets back home 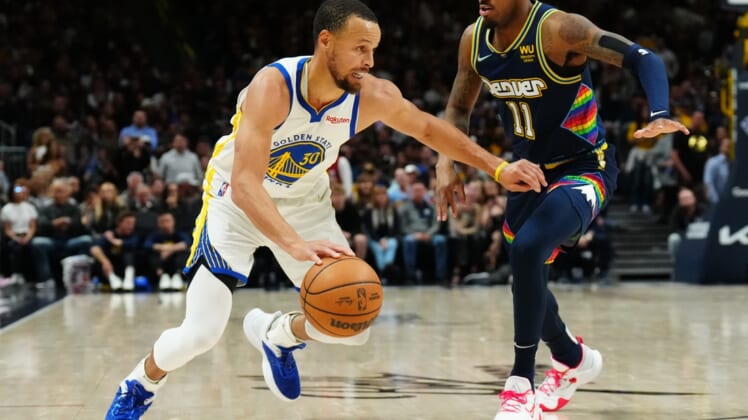 The Golden State Warriors will take a second swipe at clinching their first-round series when they face the Denver Nuggets in Game 5 on Wednesday night in San Francisco.

The third-seeded Warriors won the first three games of the Western Conference series before Denver avoided a sweep with a 126-121 home win on Sunday.

Despite a 3-1 lead in the best-of-seven series, Golden State guard Klay Thompson says Game 5 is of utmost importance to his club.

“We got to go into it like it’s a must-win,” Thompson told reporters. “We’d like to get some rest before next series and we don’t want to travel back to Denver (for a possible Game 6). We got to come with the mindset that we have something to prove, that it’s a must-win.”

The first two games were on San Francisco Bay and the Warriors prevailed by an average of 18 points. Golden State won Game 3 in Denver before the Nuggets responded with their best performance of the series in Game 4.

No team has ever recovered from a 3-0 deficit in NBA playoff history but Denver is maintaining confidence.

The Nuggets point to overcoming 3-1 deficits twice during the 2020 playoffs — against the Utah Jazz and the Los Angeles Clippers.

“Obviously of all teams in the playoffs, we are probably most comfortable being down 3-1,” Denver coach Michael Malone said. “Can I say … we have them right where we want them? No. But we are alive. We live to fight another day.”

Reigning MVP Nikola Jokic has recorded back-to-back 37-point efforts to overcome his slow start to the series. He is averaging 31.3 points, 11.8 rebounds and 5.3 assists.

Point guard Monte Morris was a big force in Game 4 by making 5 of 7 3-point attempts and scoring 24 points. He averaged just 10.7 points over the first three games so his play in Game 5 will be crucial in terms of whether the Nuggets can again stave off elimination.

“There is no pressure on us,” Morris said. “I think Game 3 and 4 has been our best basketball, how physical we want to be, we displayed that.

“Going back there, we see they’re beatable. They’re a helluva team. … But we know if we play our brand of basketball and bring the energy, we give ourselves a chance.”

Kerr didn’t like his team’s play nor its approach in Game 4.

“We needed that,” Kerr said of the loss. “I felt like we got completely away from the game plan in the first half, because I think we were almost too anxious to win the series.”

Game 5 could see the return of star guard Stephen Curry to the starting lineup after he averaged 27.5 points in 28.3 minutes off the bench after his return from a foot injury.

Curry played 37 minutes in Game 4 when he had 33 points, eight assists and four steals.

Jordan Poole started the first four games and is averaging 24.3 points. However, Poole had just 11 points on 3-of-10 shooting on Sunday as Denver shifted responsibilities and had forward Aaron Gordon shadowing him.

“Gordon got into him,” Kerr said of Poole. “That’s to be expected at this point. Jordan has made a name for himself around the league. He’s played so well, teams are going to start throwing a lot of stuff at him, including physicality, and trying to get under his skin.”