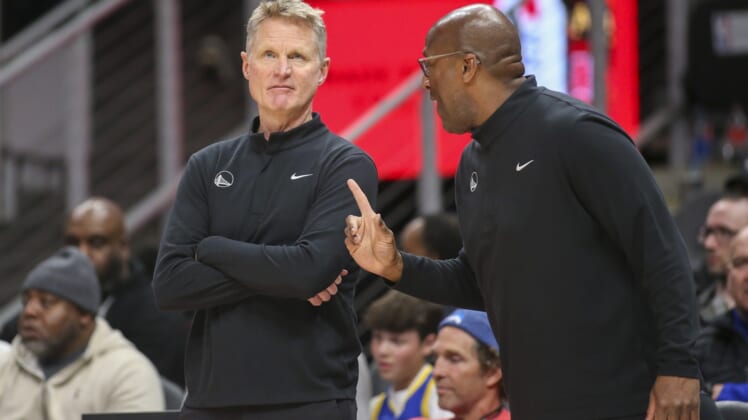 The Golden State Warriors have to decide whether to look forward or look back in the standings when they make their roster choices for Sunday’s game against the host Washington Wizards.

Having posted a 19-19 record since Jan. 5 to fall from first to third place in the Western Conference, the Warriors (48-26) began the weekend as close to fifth-place Dallas as second-place Memphis.

With a chance to gain a game on the Grizzlies in their final head-to-head meeting of the regular season Monday, the Warriors approach the Washington encounter with a tough choice.

Do they rest their veterans against the Wizards on Sunday in order to take their best shot at the Grizzlies? Or do they go all-out at Washington in hopes of creating additional distance between themselves and Utah and Dallas?

With Stephen Curry injured and already out of the lineup, Warriors coach Steve Kerr opted to rest fellow veterans Draymond Green, Klay Thompson and Otto Porter Jr. on the second night of a back-to-back earlier in the week.

Coincidentally, the Warriors lost to a lottery-bound team (Orlando) with all hands on deck Tuesday, then beat the title contender (Miami) while short-handed on that occasion.

But does the fact that Memphis awaits on the second night change things? Kerr wasn’t saying after Friday’s 121-110 loss at Atlanta, noting only that he would be checking in with the team’s director of medicine and performance, Rick Celebrini, before making any decisions.

Kerr joked after the loss that he was not looking forward to his next conversation with Celebrini, who had put Thompson on a slightly escalated minutes restriction before Kerr rode his hot hand (37 points) for more than 40 minutes in Atlanta.

Thompson’s season-high minutes and points totals went for naught in Atlanta. The Warriors, playing on the road for third time in four nights, dropped their second in three outings to begin a five-game trip.

The Warriors and Wizards met March 14 in San Francisco on a night when the Warriors welcomed Green back from a 29-game absence due to a back issue.

With Curry, Thompson and Green playing together for the first time this season, the Warriors clicked on all cylinders. They used a 73-point first half and 53.6-percent shooting display as the foundation for a 126-112 victory.

Curry, however, injured his left foot in Golden State’s next game against the Boston Celtics.

The Wizards (31-42) have lost eight of 10 in a stretch that includes the defeat in San Francisco. They’ve clinched a sub-.500 record and now find themselves counting the days before formal elimination in the Eastern Conference playoff race.

Washington, which opens a four-game homestand, is coming off a 100-97 win at Detroit on Friday.

Kristaps Porzingis saved 11 of his 30 points for the fourth quarter of a tight game against the Pistons. He then took a moment afterward to bask in the glory of late-game heroics.

“I enjoy those clutch moments, those last possessions,” Porzingis said after nailing a go-ahead shot with 29.5 seconds left. “There’s more on the line. I think every basketball player enjoys those shots more.”

Porzingis had 25 points in the loss against Golden State earlier this month.