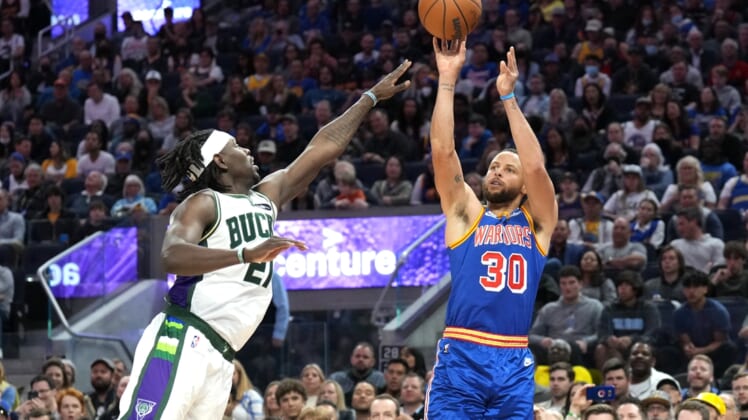 The Golden State Warriors will host a birthday party for Stephen Curry and will have Draymond Green join the fun when they duel the Washington Wizards on Monday night at San Francisco.

On a day when Curry turns 34, the biggest reason for the Warriors to throw a party might be the return of Green, who has made just a cameo appearance on another special night — Klay Thompson’s season debut — since suffering a disc injury in his back in early January.

Warriors coach Steve Kerr noted after Saturday’s 122-109 home win over the Milwaukee Bucks that the timing of Green’s return will coincide with him being fully healthy, not anything to do with the current form of the team.

The Warriors hope Green will get as much enjoyment from Curry’s birthday as he got when he was allowed to start — but was pulled seven seconds into — Thompson’s return from two surgeries and a 2 1/2-year absence on Jan. 9. The Warriors beat the Cleveland Cavaliers 96-82 that night.

The NBA has scheduled Curry’s birthday as a home game for the sixth time in his career. The Warriors have won the past four — beating the New York Knicks in 2015, the New Orleans Pelicans in 2016, the Philadelphia 76ers in 2017 and the Utah Jazz last year — with Curry averaging 28.3 points.

Golden State’s impressive win over the Bucks on Saturday included just an eight-point contribution from the All-Star Game MVP. He took only seven shots while recording more assists (a game-high eight) than field goal attempts for just the second time since December 2016.

While the Warriors are closing in on clinching a playoff spot with 14 games remaining, the Wizards have seen their chances of getting a bid to the Eastern Conference play-in tournament diminish with three straight losses to start their current four-game Western swing.

Defense has been an issue on the trip, with Washington having allowed 115 points to the Los Angeles Clippers, 122 to the Los Angeles Lakers and 127 to the Portland Trail Blazers while falling three games out of the play-in spot with 16 to go.

The Warriors will see Kristaps Porzingis for the first time since he was acquired by the Wizards from the Dallas Mavericks. Porzingis had missed 15 straight games bridging the trade with a bone bruise in his right knee.

“It’s been a handful of games, so he’s still trying to work his way through it,” Wizards coach Wes Unseld Jr. assessed. “He’s going to have some big nights, and he’s going to struggle at times, just like everybody else. But he’ll find that level of consistency. It’ll even out. He’s too good of a player.”

The Warriors and Wizards have yet to meet this season. They will complete their two-game season series March 27 at Washington.