Winners and losers from Warriors’ gritty Game 2 win over Raptors 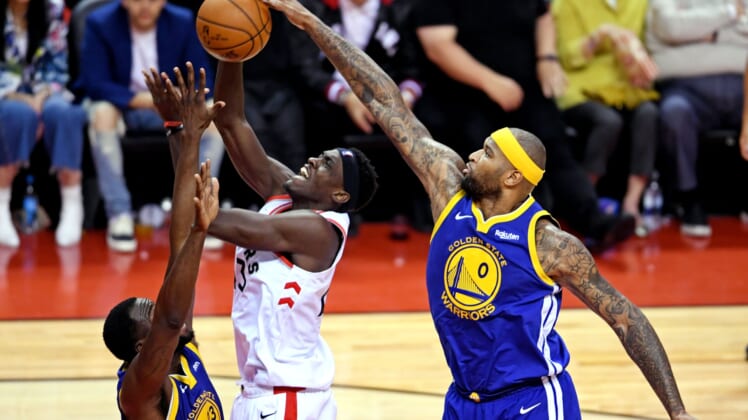 The Golden State Warriors played like defending champions Sunday night in Game 2 of the 2019 NBA Finals against the Toronto Raptors.

Following a tough loss in Game 1, the Warriors appeared destined for another with a sloppy, frustrating first half. However, a couple of stars shined brightly at key moments, and the road team was down by just five at halftime.

Golden State dominated the third quarter, and then held on in the fourth to even the series, 1-1, with a 109-104 victory over the Raptors.

Here are the biggest winners and losers from Game 2.

Winner: Curry battled through illness to provide a spark

Klay Thompson was on fire to open the game, and he kept Golden State in this one while Curry struggled early. The best shooter in the game couldn’t buy a bucket in the first quarter, scoring four points on free throws while going 0-fer from the field. He then went into the locker room with an apparent illness, and at the same time Toronto pulled ahead by double digits.

Then, Curry came back. He surged in the second quarter, scoring 12 points in the last 3:53. All told, the Warriors star scored 23 points with four assists in 41 minutes of play. Even more telling, Golden State was plus-12 when Curry was in the game.

Marc Gasol has either been incredible or a huge liability throughout the playoffs. During Toronto’s big win in Game 1, he was outstanding. On Sunday in Game 2, Gasol’s biggest impact was felt on a screen play that left Andre Iguodala on the ground holding his head.

Kyle Lowry was perhaps even more of a liability. Toronto was minus-17 with the point guard in the game, and he scored just 13 points before fouling out in the fourth quarter. Without these two starters pulling their weight, the Raptors were unable to withstand Golden State’s second-half surge.

The Warriors absolutely dominated the third quarter. After scrapping their way through the first half to head into halftime down just five, they exploded with 34 points in the third. Meanwhile, Toronto couldn’t buy a bucket, and that five-point lead quickly turned into a double-digit deficit.

It wasn’t until nearly six minutes had gone by in the third quarter that Fred VanVleet rescued the Raptors with a three to put an end to the incredible drought. All told, the Warriors outscored the Raptors by 13 points in this critical period.

The hero of Game 1, Pascal Siakam appeared to be well on his way to keeping that momentum going on Sunday. His incredible first-quarter alley-oop seemed to spark Toronto, and he was playing with the same type of energy and confidence we saw a few days ago.

Unfortunately, all that momentum quickly disappeared. Siakam was practically invisible in the second half. In the end, he had little impact on the outcome and finished with 12 points, eight rebounds and five assists.

DeMarcus Cousins had a rough first game back Thursday night in Game 1, scoring just three points in eight minutes of play. With that in mind, it was surprising that head coach Steve Kerr had him in the starting lineup for Game 2.

Cousins came to play, showing high energy from the opening tip and providing a definite boost to Golden State on both ends of the court. He was clearly winded at times and is going to struggle with conditioning going forward. However, his second game back showed he’s clearly coming back strong.

Loser: Everyone who wrote the Warriors off after Game 1

Toronto’s Game 1 victory was impressive as heck. The Raptors had Golden State’s number defensively in that contest and clearly were the better team. Following that convincing win, countless articles were written by pundits across North America declaring Toronto had the formula to finally take down the champs.

Golden State looked shaky in the first half, but the second-half Warriors put on a show that reminded all of us they aren’t to be dismissed. Let’s not forget, with Sunday night’s victory in Toronto, the Warriors now have homecourt advantage in the NBA Finals.