Warriors, Grizzlies expected to put on offensive show in Game 2 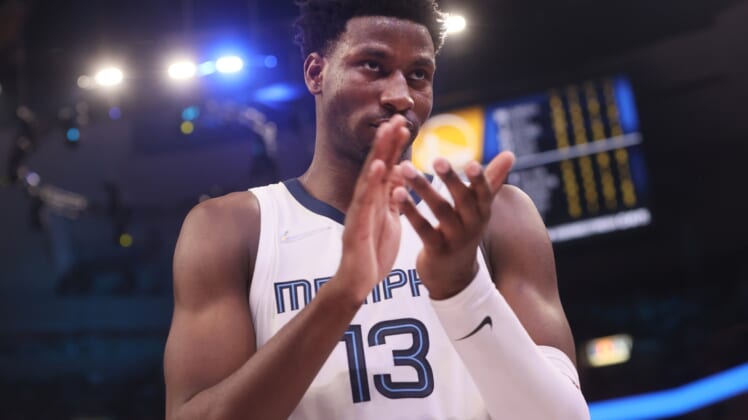 Two former high school teammates are squarely in the spotlight as the Golden State Warriors and host Memphis Grizzlies prepare for Game 2 of their Western Conference semifinal series on Tuesday night.

Jordan Poole scored 31 points for the Warriors in their 117-116 victory in the best-of-seven series opener Sunday, while his former Indiana prep teammate at La Lumiere School, Jaren Jackson Jr., poured in 33 points for the Grizzlies.

Poole, who exploded onto the postseason scene with 30 points as a starter in his playoff debut against Denver last month, was even better in his first postseason reserve role, padding his team-high point total with nine assists and eight rebounds.

At age 22, Poole became the youngest Warrior ever to score 30 or more points in a conference semifinal Game 1.

Ja Morant edged Jackson with 34 points, the third-most ever by any player 22 or younger in the opening game of a conference semifinal. But Morant couldn’t convert a buzzer-beating driving layup that could have flipped the final score in Memphis’ favor.

“I missed a layup I normally make all the time,” Morant admitted after finishing with 10 assists and nine rebounds. “Onto the next (game).”

After losing the season series 3-1 and finishing three games behind Memphis in the duel for the No. 2 seed in the Western playoffs, the Warriors threw the Grizzlies a bit of a curve in Game 1 by bringing Poole off the bench.

He responded brilliantly, including shooting a team-best 5 of 10 from 3-point distance.

While his teammates applauded his unselfishness, as evidenced by the nine assists, Poole credited Stephen Curry (24 points) and Klay Thompson (15 points).

“Being able to put the defense in a lot of rotations, the way that they’re trying to guard us, it’s going to be really hard to guard all three of us the same way when we’re out there together,” Poole observed. “It’s just being able to make the right play, and get these other guys good looks.”

Jackson was even more deadly than his old high-school pal from beyond the 3-point arc, burying 6 of 9.

And like Poole, there was much more to his game than just long-range shooting. He also retrieved six offensive rebounds as part of a 10-board game that completed a double-double.

In the end, even with Warriors defensive ace Draymond Green having been ejected for a flagrant foul on Brandon Clarke in the second quarter, Memphis came up short in a Game 1. That also was the scenario in the first round against the Minnesota Timberwolves.

Grizzlies coach Taylor Jenkins left the arena Sunday expecting the same type of rebound that saw his team win four of the next five games against Minnesota.

“Do what we’ve done all season,” he said of the plan moving forward. “Rest. Recover. Watch the film. Get better and come out and compete hard (in Game 2).”

The Warriors are 2.0-point favorites ahead of Game 2 at BetRivers and DraftKings and 1.5-point favorites at BetMGM, where the line has shifted from 2.5 with Golden State backed by 64 percent of the spread handle. Golden State has also drawn 58 percent of the spread handle at DraftKings, but it’s Minnesota that has been supported by 77 percent at BetRivers.

Oddsmakers are expecting a high-scoring game, with all three sportsbooks setting the Over/Under market at 227.5 points. Bettors have still backed the Over with 63 percent of the handle at BetMGM and 62 percent at DraftKings, while the Under has drawn 73 percent of the action at BetRivers.