Warriors expect Draymond Green back for game vs. Heat 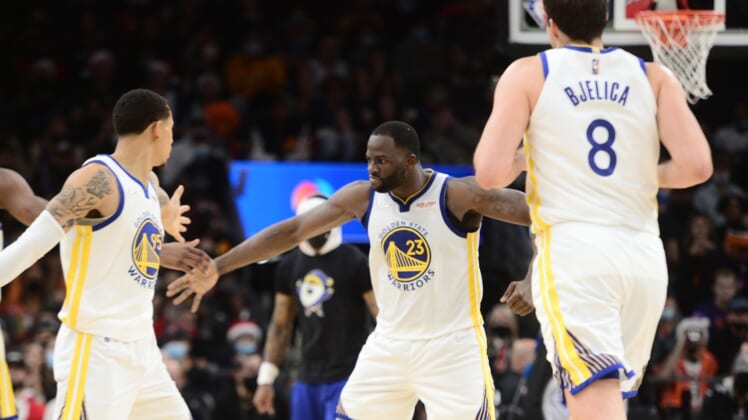 The Golden State Warriors expect Draymond Green to return from COVID protocol in time for Monday night’s game against the Miami Heat in San Francisco.

The Warriors have been without Green for their past two games, including Saturday’s 123-116 road win over the Utah Jazz.

It’s possible the Warriors also could get back Damion Lee from the health and safety protocol, and if that happens, they’d have only injured Klay Thompson and James Wiseman unavailable.

The Heat, meanwhile, fell 115-113 at Sacramento on Sunday without six players who are in COVID protocol, including Duncan Robinson and P.J. Tucker, and five injured players, including Bam Adebayo, Victor Oladipo and Markieff Morris.

Omer Yurtseven (22 points, 16 rebounds) and Kyle Lowry (14 points, 12 assists) recorded double-doubles in the loss, which tipped off a back-to-back sequence for the depleted Eastern squad.

The Warriors hope to have more of the triple-20s when Thompson returns from his almost 2 1/2-season absence. That could be any day now, he said during the Warriors’ just completed trip to Denver (game postponed) and Utah.

“I don’t want to sit around anxious and wait for a target date,” Thompson said. “But it should be relatively soon. I think I’m ready.”

The Warriors have started Jordan Poole 28 times in Thompson’s spot this season. But when the third-year guard returned from COVID protocol to face the Jazz, he came off the bench for the first time this season.

After a six-game layoff, he contributed 10 points to the win in 17 minutes, perhaps getting a trial run at the backup role he figures to have when Thompson plays.

Green’s return could mean that Porter will go back to the bench as well. The veteran had a big night in a starting role against the Jazz, adding seven rebounds and eight assists to his 20 points.

The Heat, whose narrow loss Sunday ended a five-game winning streak, wish they had the Warriors’ embarrassment of riches. Coach Erik Spoelstra has experienced the opposite dynamic — turning reserves into starters — with Robinson, Tucker and Adebayo out.

Yurtseven, a rookie 7-footer, has started in Adebayo’s spot the past four games and has responded with four straight double-doubles, including season bests in both points and rebounds in Sacramento.

After going undrafted last year out of Georgetown and playing for the Turkish national team, Yurtseven earned a spot in Heat training camp — and eventually on their roster — with an impressive two-day stint at the California Classic Summer League in August in Sacramento. His second game featured 25 points and eight rebounds against the Warriors.

“I didn’t know how they would change my life,” he said of the Sacramento games. “But I did know I was capable of big numbers and leading the team and getting those wins, and that’s exactly what happened.”