Can the Golden State Warriors reach the NBA Finals in 2021? 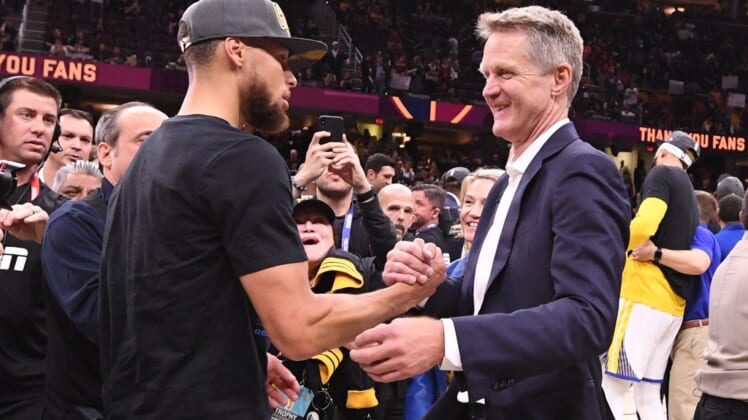 The Golden State Warriors played the 2019-2020 NBA season with a skeleton crew of sorts as none of the main championship cogs played more than 43 games due to injury. As such, the 2020 season was a retooling season.

The big question: With a fully recovered squad and a shortened season, is it possible for the Warriors to win the NBA championship in 2021?

Projections for the Warriors in 2021

With Golden State firmly looking toward the 2020-2021 NBA season, there’s no shortage of questions heading into the offseason. 2020 was a lost season: the core three of Klay Thompson, Stephen Curry and Draymond Green all either had season-ending or other injuries that knocked them out for long stretches.

Although the players around the Warriors’ core changed, there’s reason to believe Golden State will perform to their standards. The best way to determine this is by looking at Warriors Offensive Rating (ORtg), Defensive Rating (DRtg) and Net Rating (NRtg) overall. Those are metrics to determine how many points a team scored, points allowed and the point differential, respectively.

During the Warriors dynasty, they were:

It’s important to note the Warriors had Andre Iguodala, Harrison Barnes or Kevin Durant on the wings and a lengthy center. With all three gone and an inconsistent rotation, the Warriors might struggle defensively. That said, expect the 2020 Warriors to be within:

If Golden State retains Andrew Wiggins, develops the bench more and integrates their high draft pick successfully, they should be in good shape. Add in a healthy Curry, Thompson – off the bench or starting – and Green and the Warriors are looking deadly coming into the 2020-2021 season.

For the Warriors to make it to NBA finals in 2021, they have to run through the gauntlet known as the Western Conference. At the very least, the Warriors have to beat some combination of the Los Angeles Lakers and Clippers, Denver Nuggets, Utah Jazz, Houston Rockets and Dallas Mavericks.

Though Golden State has never faced the Lakers, Nuggets or Mavericks during their run, they have faced the Clippers, Jazz and Rockets before. In the 32 games the Warriors played against the aforementioned three, they are 24-8, good for a 75% win percentage.

For reference, between 2015-2019, the Warriors played 77 Western Conference playoff games. They won 60 of those, or about 77%. Once the Warriors make it to the playoffs again, their experience against those teams should prove beneficial.

The bottom line: The Warriors can reach the NBA Finals in 2021

In all, the toughest teams the Warriors will face comes from the West. If Golden State face any of the above-mentioned teams, each has the chance to potentially knock them out. Since this is a retooled version of the Warriors, it remains to be seen how each player will mesh with one another.

Moreover, if the Warriors make it to the Finals, they could face the Toronto Raptors, Milwaukee Bucks, Philadelphia 76ers or the Boston Celtics. The Warriors have no experience playing the latter three but have lost to the Raptors before. Also, though the 76ers and Celtics are competing in the East, they aren’t contending for the Finals.

The last component to take into account is luck. Sadly, injuries are part of the game and some injuries are just untimely. That’s why if all goes well and the ball bounces their way, the Warriors can reach the NBA Finals in 2021.