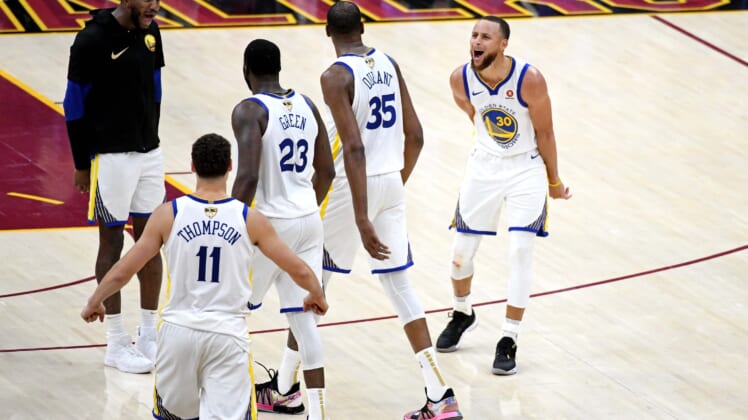 Barring a cataclysmic injury to one of their two MVPs, there’s no reason to believe the Golden State Warriors won’t win their third consecutive NBA title and fourth in five seasons.

That’s the narrative we’ve seen thrown around from people who suggest the NBA is much more predictable than other professional sports leagues. Golden State built a juggernaut by drafting from within and added to that by signing former NBA MVP Kevin Durant following a 73-win season. That broke the NBA. Competitive nature itself is gone from the hardwood.

The next several months will be filled with meaningless regular season basketball until these Warriors hoist that inevitable Larry O’Brien trophy in June. From there, a relocation to San Francisco’s Chase Center will only add to the latest dynasty around the Association.

As the great Lee Corso would say, “not so fast my friend.”

Boasting an 11-2 record heading into Monday’s game against the Los Angeles Clippers, Golden State lost for the second time in three games. Not a big deal, right? Remember, this team coasted through the regular season last year. It’s a regular season that matters very little for a team that will soon boast five All-Stars in the starting lineup.

Unfortunately for the crowned heads sitting on that throne, tension boiled to the surface between Durant and the hot-headed glue that holds the team together, Draymond Green, during Monday’s loss to the Clippers.

After Draymond failed to pass the ball to Durant with an opportunity to win in regulation, ultimately leading to an overtime loss, the two had words on the court. It continued in the locker room, with multiple members of the Warriors going after Green, Durant included.

Given he just returned Monday from a toe injury, there’s no guarantee that Green was going to be playing in the second half of a back-to-back. Even then, sitting Green was a calculated decision from Kerr and Co. As the tension boiled over in the locker room, the focus of said argument centered around Durant’s free agency.

It’s been something we’ve seen thrown around the NBA world as a narrative. Will Durant leave in free agency this coming summer? And while Durant himself seems to be intent on sticking with Golden State over the long term, it’s the first time said narrative has made it into the Warriors’ locker room.

What’s the issue here? Can it be resolved? Is there some sense that this might mushroom into a season-long issue, either leading to Durant’s departure in free agency or resulting in the Warriors trading Green?

Anything at this point would be speculation. But we know full well just how much Durant cares what others think of him. It’s been readily apparent on social media and throughout his presence in the public.

Apparently, Green went as far as to continually call Durant a “b***c” during their argument on the bench Monday. How is that going to sit well with a player in Durant multiple people have referred to as a “cupcake?”

The backdrop here is obvious. Green is one of the primary reasons Durant bolted Oklahoma City for Northern California back in 2016. The two have had a solid relationship leading up to Monday’s meltdown.

But the issue here is larger than one hiccup. In a league of petty and drama, that Warriors have now proven they’re not immune. With such strong personalities on this roster, the injured DeMarcus Cousins included, one now has to wonder whether the Warriors are the only force that can stop them from three-peating as champs.

At the very least, it might now be time to check in on the possibility that the 2018-19 season will be the final version of these Warriors.

Because, unlike what the NFL’s New England Patriots might want us to believe, winning doesn’t cure all ills.