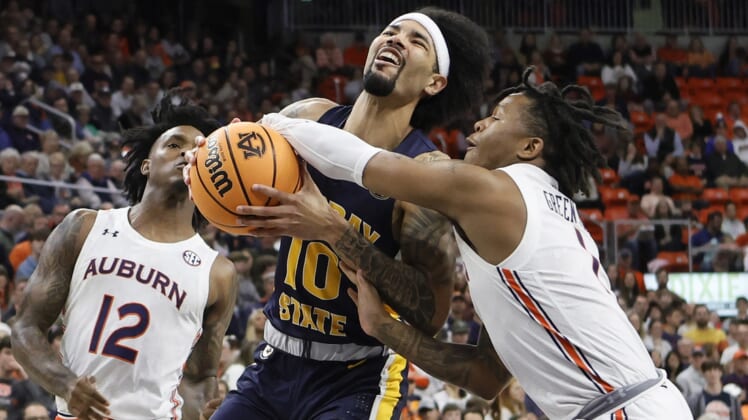 Walker Kessler collected 13 points, seven rebounds and seven blocks to propel No. 12 Auburn to a 71-58 victory over visiting Murray State on Wednesday in a nonconference game.

Wendell Green Jr. recorded 13 points and a career-high 10 rebounds off the bench for the Tigers (11-1), who have won eight in a row since dropping a 115-109 double-overtime decision to UConn on Nov. 24.

Jabari Smith had 12 points and 10 rebounds as nine different players scored for Auburn. The Tigers also enjoyed a 48-33 edge in rebounding en route to improving to 6-0 at home this season.

Auburn’s Allen Flanigan had three points and four rebounds in his season debut after undergoing surgery on his Achilles on Sept. 3. He averaged 14.3 points, 5.5 rebounds and 2.9 assists last season.

Two-time reigning Ohio Valley Conference Player of the Week Tevin Brown scored 16 of his 22 points in the first half for Murray State.

KJ Williams added 12 points and eight rebounds for the Racers (10-2), who saw their seven-game winning streak come to a halt.

Justice Hill recorded a layup, a 3-pointer and one free throw as Murray State began the second half on an 8-4 to trim its deficit to 41-35. Smith answered with a 3-pointer before Green added a pair of free throws and a 3-pointer from beyond half court prior to the shot clock expiring to push Auburn’s advantage to 14 points.

The Tigers kept their foot on the gas, with Kessler and Green each making a layup to extend the team’s lead to 62-44 with 8:13 to play. Auburn was not seriously challenged the rest of the way.

Auburn answered a modest three-point deficit by scoring 15 of the next 17 points to seize a 21-11 lead midway into the first half. Kessler scored six points in that surge for the Tigers.

Brown scored his team’s next 12 points to trim Auburn’s advantage to 33-25. However, he was whistled for a foul that turned the tide back in the Tigers’ favor.

Devan Cambridge and Green each sank a pair of free throws before Williams answered with a layup at the buzzer.