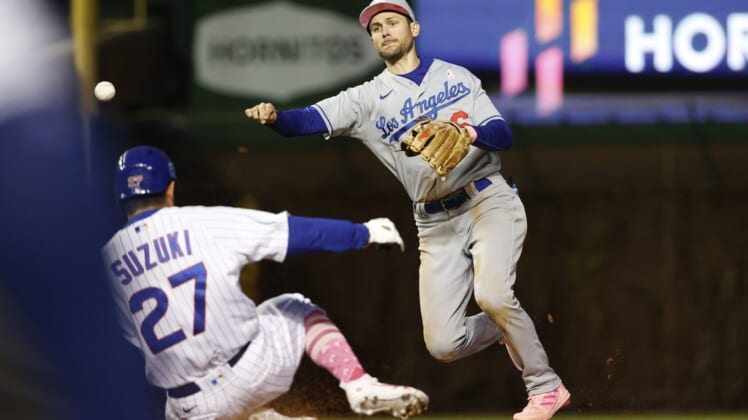 Walker Buehler won his third straight start Sunday night, holding the host Chicago Cubs to a run over seven innings as the Los Angeles Dodgers completed a three-game sweep with a 7-1 win.

The Dodgers won three games in a span of about 33 hours. After a rainout Friday, the teams played a doubleheader on Saturday.

The Dodgers have won six straight overall. The Cubs have lost five consecutive and eight of their last nine.

Buehler (4-1), who tossed 14 scoreless innings over his previous two starts, surrendered four hits and two walks while striking out six in his 100th career start. The right-hander didn’t allow a runner past first base after Rafael Ortega scored in the first.

Trea Turner, Justin Turner, Cody Bellinger and Freddie Freeman had an RBI apiece for the Dodgers. Bellinger finished with three hits — his most in a regular season game since Sept. 18, 2020.

Willson Contreras had an RBI single in the first for the Cubs.

Justin Steele (1-4), who was moved up a day in the Cubs’ rotation after scheduled starter Marcus Stroman was placed on the injured list for unspecified reasons earlier Sunday, allowed two runs on three hits and two walks with three strikeouts before exiting after four innings due to a sore left thumb.

The Cubs took a quick lead against Buehler in the first. Ortega led off with a double, went to third on a throwing error by catcher Will Smith and scored on Contreras’ two-out single.

Steele allowed one hit through the first three innings before the Dodgers used small ball to take the lead in the fourth. Trea Turner walked with one out, Will Smith reached on an infield single and Max Muncy walked before Justin Turner lofted a sacrifice fly and Bellinger legged out an RBI infield single.

In the fifth, the Dodgers greeted Michael Rucker with three straight singles before Trea Turner hit into a run-scoring double play and Mookie Betts scored on a wild pitch.

In the seventh, Gavin Lux drew a leadoff walk, went to third on Betts’ single and scored on Freeman’s sacrifice fly. A two-base error by Cubs shortstop Nico Hoerner allowed two runs to score in the ninth.