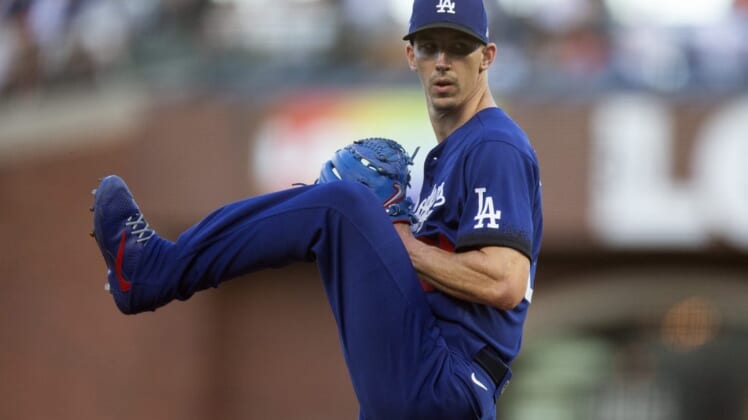 Los Angeles Dodgers ace Walker Buehler is awaiting tests on his right (pitching) elbow after he was limited to four innings in a 7-2 loss to the host San Francisco Giants on Friday night.

Buehler, who has struggled at times this season while going 6-3 with a 4.02 ERA in 12 starts, said he felt his elbow “grab” after he threw a breaking pitch in the third inning against the Giants.

“I tried to pitch through it and see if it would pop away. Sometimes that will happen, but it didn’t happen for me tonight,” said Buehler, who underwent Tommy John surgery following the 2015 draft. “This one is just a little different and something we need to check out.

“Whatever it is, we’ll handle it. I have all the faith in our medical staff and whatnot, but before we can dive into that, we need to know what we’re doing. I’d like to know what I’m actually dealing with with my elbow and my career.”

Los Angeles manager Dave Roberts said he found out after the third inning that Buehler felt a little “zing” in his elbow but that Buehler wanted to continue and felt that he could. After the fourth, Roberts said it was time to stop.

“There wasn’t any pain that continued to add, but then, after that inning, we just figured that was going to be enough,” the manager said. “We’re trying to figure out when we can do some testing, obviously as soon as possible makes the most sense, and then we’ll see where can go from there.”

After taking a loss on Friday, Buehler has a 46-16 career record. The three runs he yielded in four innings pushed his lifetime ERA to 3.02 ERA in six seasons. He is a two-time All-Star and finished fourth in National League Cy Young Award voting in 2021.

Buehler said he has dealt with issues with his elbow for “years and years,” but Friday night was different.

Roberts said Buehler is “very in tune with his body, and if things aren’t exactly right, he’s very attuned to it. It’s just something that he sort of learned how to manage. It wouldn’t surprise me if that is some reason for the inconsistencies this year. He’ll never say that. …

“It’s something that it is kind of normal for him to kind of deal with some sort of uncomfort with his elbow, but to get to the point where he feels like, or we or he feels like, it puts him in harm’s way, we just haven’t got to that point until tonight.