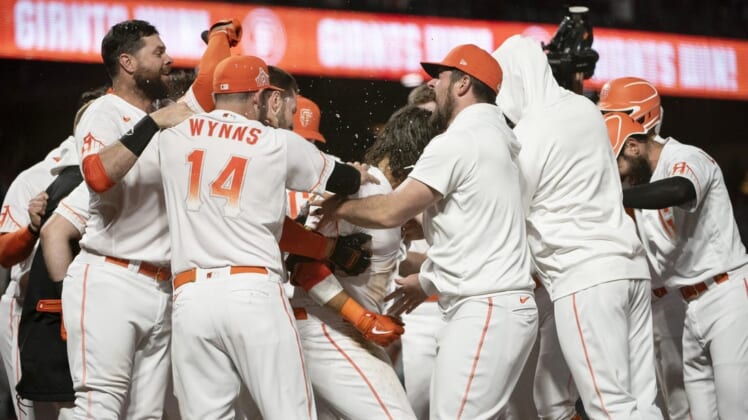 Riding the momentum of two walk-off wins in the last three days, the San Francisco Giants will attempt to match their longest winning streak of the season when they host the Arizona Diamondbacks on Wednesday night.

The Giants were one strike from a 1-0 defeat on Tuesday before Thairo Estrada tripled, after which Brandon Crawford blasted a two-run homer to flip the final score in the home team’s favor.

The game had a similar ending to Sunday’s, when Estrada came through in the ninth with a two-run shot after the Pittsburgh Pirates had taken a 7-6 lead into the bottom of the inning.

“We always believe in our guys late in the game,” Giants manager Gabe Kapler said after Tuesday’s dramatics. “You know Brandon Crawford is going to get big hits at some point. That was a big one for us.”

As they shoot for a six-game winning streak, which they last accomplished May 7-13, the Giants hope left-hander Carlos Rodon (11-6, 2.95 ERA) will continue his brilliant recent form. He has won his last three starts, limiting the opposition to just three runs and 13 hits in 18 1/3 innings, with 20 strikeouts.

The 29-year-old hasn’t had success in two previous starts against the Diamondbacks this season, suffering 7-3 and 8-3 losses while allowing nine runs in 11 innings. Those were the first two starts of his career against Arizona.

And now he must deal with a hot Christian Walker, who has produced Arizona’s only two runs of the series with a pair of homers.

The Diamondbacks were beaten 6-1 in the opener Monday.

Walker, who matched his career high with his 29th homer on Tuesday, took Rodon deep in their July 23 meeting in Arizona.

The slugger will seek to become the first Diamondback to have a 30-homer season since Eduardo Escobar hit 35 and Ketel Marte 32 in 2019.

Walker came through again one night after an incident in the Arizona dugout that Diamondbacks manager Torey Lovullo brought to the umpire’s attention.

During the first inning Monday night, the two monitors in the visitors’ dugout in San Francisco were designed to show the bullpens were in fact providing a live game feed, which is against Major League Baseball rules.

Lovullo informed the umpires after the top of the first and also assured Kapler the Diamondbacks weren’t doing anything illegal.

“It’s a very, very hot topic in baseball,” Lovullo said Tuesday. “I don’t ever want to be accused of cheating. This organization does things with integrity, and I just wanted to make sure I was as honest as possible.”

Diamondbacks right-hander Zach Davies (2-4, 4.11 ERA) on Wednesday is scheduled to make his first start of the season against the Giants and ninth of his career. He’s gone 1-4 with a 3.96 ERA previously against them, including 1-3 with a 3.47 ERA in five career starts in San Francisco.

The 29-year-old hasn’t gotten a decision in three starts since returning from a shoulder injury. He worked his way up to five full innings and 82 pitches in his last start, a 5-3 road loss to the Colorado Rockies on Friday.