Wade Miley expected to return for Cincinnati Reds against Phillies 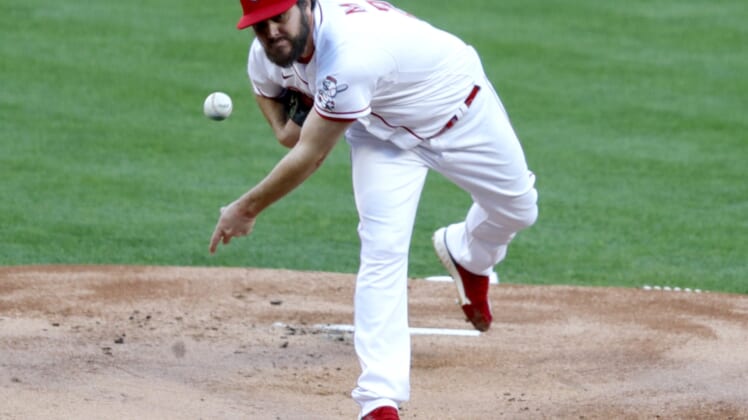 Wade Miley returns to the injury-plagued Cincinnati Reds rotation on Monday in a Memorial Day holiday matinee against the visiting Philadelphia Phillies.

Monday’s game kicks off a three-game series in which two will be played in the daytime at Great American Ball Park.

Miley (4-4, 3.50 ERA), dealing with sinus issues, is expected to come off the 10-day injured list to make his ninth start of the season and his first appearance since suffering a left heel injury against the San Francisco Giants on May 19.

X-rays were negative and an MRI showed no damage, but the next day Miley went on the 10-day injured list with a left foot sprain. Since throwing 114 pitches and completing the 17th no-hitter in franchise history in a 3-0 win on May 7 at Cleveland, Miley has made just two starts, losing both, including on May 14 when he surrendered 11 hits and eight earned runs in a 9-6 loss to the Rockies.

“I think in the long run, this could be a positive thing. It’s a long season,” Reds manager David Bell said. “It was a shortened season last year for him, especially. Maybe it turns out to be something that just gives him a little slight break, skip a start and he’s back in there.”

For his career, Miley is 2-1 with a 3.46 ERA in four starts against the Phillies.

Eugenio Suarez connected for his 12th homer on Sunday, running his streak for scoring a run as the leadoff hitter to five games. He has scored in every game since David Bell moved him into the top spot in the order.

With his sharp single to left in a three-run first inning Sunday, National League batting leader Nick Castellanos extended his hitting streak to 16 games, a game shy of his career best (2017). The streak is the longest active streak in the majors and is the longest hitting streak by a Reds batter since Joey Votto’s 17-game streak from July 26-Aug. 12, 2017.

The Phillies counter with right-hander Vince Velasquez (2-0, 2.95), who has faced the Reds four times, two starts, in his career, posting a 2.61 ERA with no decisions in those outings. The series with the Reds is the final leg of a three-city, nine-game road trip for Philadelphia. Sunday’s 6-2 loss at Tampa Bay loss dropped them to 2-4 in the first six games.

The Phillies will be without outfielder Roman Quinn indefinitely. Quinn, who missed time earlier with a lacerated right index finger, was placed on the 60-day injured list on Sunday after a left Achilles injury suffered Saturday night while rounding third base and scoring.

“He’s been playing well for us,” Phillies manager Joe Girardi said. “He gets a freak injury with the stitches in his finger. And then he gets this. I feel for the kid. I really do. We’re going to miss him.”

The series also marks the return of former Reds reliever Archie Bradley, who has had his struggles since joining the Phillies this season, going 1-1 with a 6.75 ERA in nine appearances.