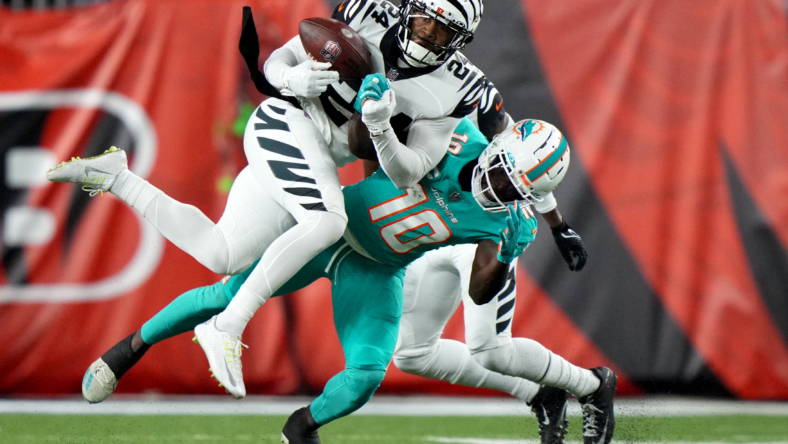 Cincinnati Bengals safety Vonn Bell had played in 96 regular-season games throughout his career leading up to Thursday night’s matchup against the Miami Dolphins.

That 96-game span saw the former second-round pick from Ohio State record all of two interceptions despite being a full-time starter in stints with the New Orleans Saints and Bengals.

An unlikely hero Thursday night as Cincinnati evened its record to 2-2 against the previously undefeated Miami Dolphins, Vonn Bell matched his career interception total with two.

His initial pick came late in the first quarter when Tua Tagovailoa targeted Tyreek Hill on a deep pass.

With Cincinnati holding on to a 20-15 lead late in the second quarter and Teddy Bridgewater replacing the injured Tua under center, Bell picked off Bridgewater inside Cincinnati’s 10-yard line and returned it to Miami’s end of the field to pretty much seal the victory.

Cincinnati would ultimately score a touchdown on a Joe Burrow pass to Hayden Hurst to take a two-score lead with less than two minutes remaining.

The ugly backdrop to this game was the injury Tagovailoa suffered to his head and neck, forcing him to leave the stadium in an ambulance.

From an in-game perspcective, that obviously impacted Miami. The team led 15-14 after three quarters before seeing Cincinnati run off 13 consecutive points in the final stanza.

To say that this is a huge win for the defending AFC Champions would be an understatement. Just a few short days ago, this squad stood at 0-2 and was coming off an ugly loss to the injury-plagued Dallas Cowboys. It is now 2-2 with a long week of rest before taking on the division-rival Baltimore Ravens Oct. 9.

As for Vonn Bell, he’s not necessarily known for his coverage ability. Last season with Cincinnati, the veteran safety yielded a 75% completion mark and 113.6 QB rating when targeted.