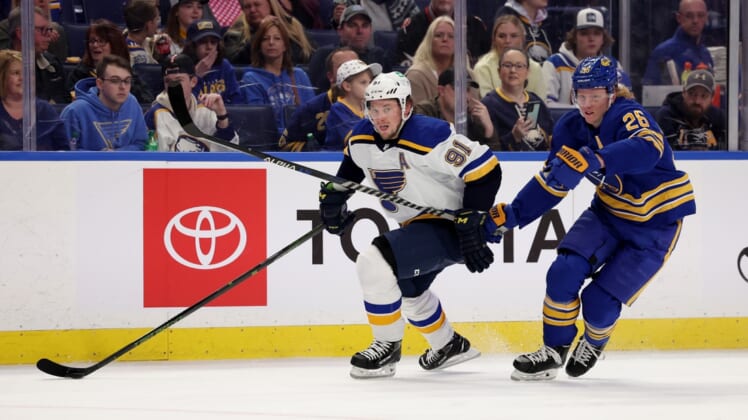 Tarasenko scored a hat trick and added two assists for the Blues (44-20-10, 98 points), who are 9-0-1 during that streak with four or more goals scored in each game.

Robert Thomas had five assists and Pavel Buchnevich had a goal and two assists for the Blues. David Perron and Brandon Saad also scored and Jordan Binnington made 35 saves in just his fourth start since March 13.

Rasmus Asplund and Alex Tuch scored for the Sabres (27-38-11, 65 points), who lost for the fourth time in five games. Craig Anderson made 22 saves.

The Sabres struck first when Asplund scored on a deflection with 7:40 left in the first period.

Perron tied the game 1-1 with a power-play goal with 24 seconds left in the first period. Torey Krug set up his one-time blast from the left circle.

The Blues struck again on the power play just 17 seconds into the second period. Saad cut through the right circle and converted Thomas’ centering pass.

Thomas extended his point streak to 11 games. He has six goals and 17 assists during that span.

Tuch tied the game 2-2 by scoring from the slot about four minutes later. Owen Power, the first overall pick of the 2021 draft, set up the goal for his first NHL point.

The Blues regained the lead less than 3 minutes later on a tic-tac-toe passing play from Thomas to Buchnevich to Tarasenko, who scored into the open side of the net.

Tarasenko made it 4-2 with 7:15 left in the second period. He danced around Power at the Buffalo blue line, then reached the puck around Anderson with one hand on his stick.

Buchnevich scored 6:18 into the third period to push the lead to 5-2. Tarasenko’s empty-net goal — a perfect shot from the St. Louis defensive zone — made it 6-2.