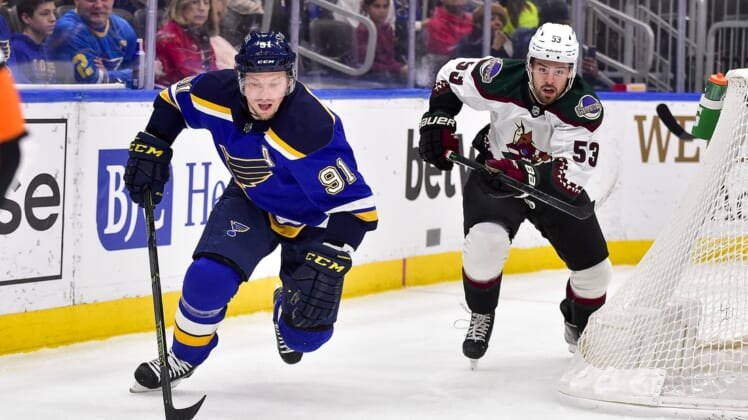 Pavel Buchnevich had a goal and two assists for the Blues (39-20-10, 88 points), who have gone 4-0-1 in their last five games. Ivan Barbashev and Brayden Schenn also scored and David Perron and Robert Thomas each had two assists.

Ville Husso made 21 saves to earn the victory.

The Blues outshot the Coyotes 10-7 in the scoreless first period and created the better scoring chances. Buchnevich and Brandon Saad each hit the right post while shooting toward an open side of the net.

Then the Blues scored three times during a span of 4:16 to take a 3-0 lead in the second period.

They scored their first goal during a delayed penalty call against the Coyotes. Calle Rosen partially fanned on his shot from the slot, but Barbashev put the rebound into the open left side of the net.

Just 1:17 later, Tarasenko scored by breaking to the left post and converting Thomas’ centering pass from behind the net. Schenn pushed the lead to 3-0 with a power-play goal, scoring from the left faceoff dot off Perron’s pass.

The Blues made it 4-0 with a short-handed goal with 5:21 left in the second period. Ryan O’Reilly stole the puck and slid the puck to Buchnevich, who finished off the 2-on-1 rush.

The best Arizona scoring chance of the period came in the waning seconds, when Husso denied Michael Carcone’s breakaway with a glove save.

Schmaltz ended Husso’s shutout bid with a rebound conversion 3:09 into the third period. But Tarasenko restored the Blues’ four-goal lead by scoring from the slot off Thomas’ centering pass.