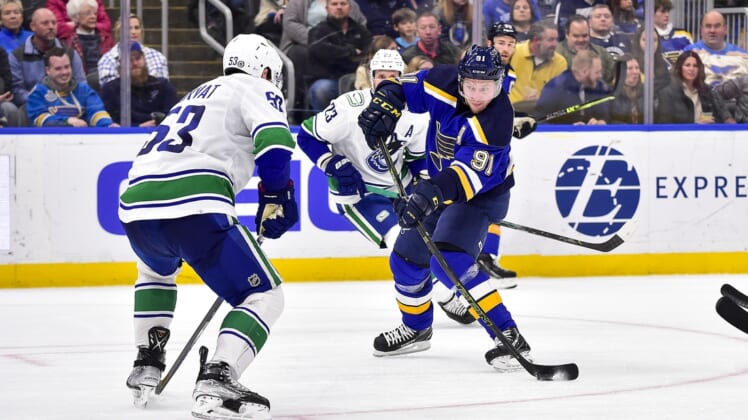 Vladimir Tarasenko had two goals and an assist to reach the 500-point plateau and lift the St. Louis Blues past the visiting Vancouver Canucks 4-1 Monday.

David Perron and Marco Scandella also scored for the Blues, who won for just the second time in their last seven games. Robert Thomas had two assists and Ville Husso made 35 saves to earn the victory.

Brad Hunt scored and Jaroslav Halak made 25 saves for the Canucks, who saw their four-game points streak (2-0-2) snapped.

The Blues struck first with a strange goal 6:37 into the game. Tarasenko took a sharp-angle goal that bounced high off the knob of Halak’s stick, then off the crossbar, then off Scandella as he drove to the net.

Ivan Barbashev set up the second Blues goal with 5:58 left in the period. He stole the puck from Canucks winger Conor Garland at his own blue line, led a 2-on-1 rush with Perron and fed him for his goal off the right wing.

The Canucks bounced back to apply heavy pressure in the second period, outshooting the Blues 17-9 and generating many great scoring chances.

The Blues pushed their lead to 3-0 just 49 seconds into the third period after Pavel Buchnevich made a diagonal pass to Tarasenko at the bottom of the right circle.

Hunt responded less than two minutes later by scoring off the right wing on a 3-on-1 rush.

The two teams will play again Wednesday night in Vancouver.